Hopes were high for this highlight of the York Whisky calendar, the festival’s massive success in other cities has helped bring in record numbers of exhibitors which combined with the day split into two sessions had meant more people than ever before have the opportunity to learn about and taste some of the best whiskys in the world. This is going to be a lot of words.

The first exhibitor I spent time with was Compass Box. This bold company has spent the past 10 years working on their own bespoke maturation and vatted malts to produce some very interesting drams. Their first attempts at adding a year or two of extra maturation in european oak or a sherry cask were foiled by the SWA, who flexed their muscles and said No they’re not allowed to sell whisky that was aged in a normal bourbon cask that had a few staves suspended in the middle of it. They fixed that by retaining the services of a cooper and making their own barrels out of used bourbon staves and brand new european ends. 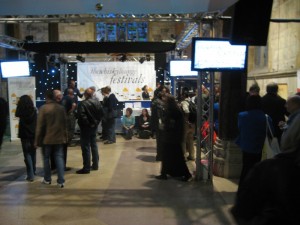 Their core range of five whiskys is well documented on their website and we were guided through them by an exhibitor who knew his range well. I wasn’t too fussed about Asyla, a 50/50 blend of malt and grain that was summery and fruity but lacked punch. I skipped Oak Cross, which looked designed to appeal straight to the Bourbon crowd and moved onto The Spice Tree. This strong, spicy and zingy dram made me mentally sit up and start paying attention, which was just as well because their Peat Monster packed a real bite. It had many layers of smoky, spicy, salty heavy oak Islay goodness and for the third dram of the evening boded very well indeed. Next up was Hedonism, which was very new to me. It’s a blend of 3 grain whiskys, matured in the usual way for between 20 and 29 years. It started subtle and creamy, built through a pile of spice and ended quickly with a short, sweet finish. I found it hard to quantify because I hadn’t had matured Grain whisky before, but it was very characterful. Unfortunately its price reflected the very limited supply, so I left empty handed. But not before trying their Orangerie concoction. They took their Asyla whisky and infused it with a big pile of oranges, so whilst it’s not just whisky any more, it’s bound to appeal to some people. I wasn’t one of them, it was sweet, tasted of nothing but oranges and its smell was square in my deadspot. However, my description of it to my friends and family have left them all hunting it, so it can’t be so bad.

Next up was Berry Brothers, who had managed to whittle their full range down to ‘just’ the 20 or so bottles on show, which was way too many to try to get through in the time. The first to stand out was a dark, richly oak-aged Trinidad rum which got the thumbs up from the whisky fans who hadn’t come across it before. Teaninich is a large Diageo speyside distillery that puts out a maximum 2.7 million litres of spirit that mostly goes into Johnnie Walker, single malt bottlings are rare and independant ones doubly so. It’s a good example of the robust Highland character and was remarkable.

With a regretful glance at the watch, I pressed onto the Morrison Bowmore stand to briefly explore their Auchentoshens. Auchentoshen is unusual even for a lowland because it actually does triple distill its spirit. For me, the money was with their Threewood. Their nutty spirit is aged for 12 years in bourbon, then 1 year in Olosoro and yet another year in Pedro Ximinez butts. You’d think you’d want a flake in that after all that time with the sherry but I found it characterful and interesting.

LVMH were well represented by Glenmorangie and Ardbeg. Ardbeg rarely disappoints and their Uigeadail was up there with the best, retaining its stereotypical flavours but managing to turn them up to 11 without resorting to bottling at full cask strength. We had a detailed Glenmorangie Tasting earlier on this year, but felt it would be a useful test to try the Sonalta again, in the interests of science of course.. Yep, just as good as we remembered, retaining the core characteristics of GlenM balanced with some body from the sherry.

Despite the siren song from the people serving hot falafels or pork butties in the corner, enough people in the crowd had asked us if we’d tried the Bonny Haven yet for us to think this was worth fixing. Whilst Eddie was starting to announce the best of the festival tasting, we pounced on the Creative Whisky Company to see what all the fuss was aboot. They’re an independant bottler and have a strong range, not too big and not too small. Their 4 year old Bunnahabhain was just stellar for a young spirit. I don’t know quite how they talked the distillery out of this particular barrel, but it was an unusually clean and clear taste, capturing the sweet peaty essence of that corner of Islay with a generous warming finish. Indy single cask bottlings are always limited in supply, but this was almost comic with the tally ticking down of how many they had left under the table. 11 bottles remained when we were there. I just had time to sneak in a try of their Glen Ord. whilst reliable, it’s still something special and I don’t think I’ve got anything like it in my cupboard at the moment. It’s a true heavyweight Highland spirit with big spicy notes of fruitcake finished off with smooth vanilla. It’s unusual to find it as a indy single malt, the majority of its 3.2 million litre capacity is used for Diageo’s blends.

At this point we had to dash off to be spoilt for life by the Best of the Festival Tasting, which I think is worth a post all to itself so I’ll save trying to decipher those notes for another day.

Eddie’s got a good selection of photos up of the event, including a couple of me doing my bit schilling for Bruichladdich in my Academy t-shirt. If I can’t show it off there, when can I?

I will mention that on my way out, I paused to buy one of the last three bottles of Bunnahabnain 4 yr old. I thought it was sufficiently unusual and interesting to pass by and I haven’t got anything quite like it already. And yes, I did get in trouble for trying to jam yet another bottle into the cupboard.

Overall, I found the evening to be slightly disappointing and totally overwhelming in equal measures. It was a bit annoying that all the drams I made notes about were the wrong side of £50 per bottle. I know they’re special, but a whisky has got to be truly stellar for me to justify that many spends, even when drunk and silly in charge of a credit card. I’m also a bit worried about my tendancy towards not missing out on something that’s strictly limited edition. Yes, it won’t go off when it’s in glass and it can be an investment and all that. but it’s also flipping expensive..

Going to the best of the festival masterclass meant I had the chance to sample and learn a bit about some fantastic drams, total sensory overload. But it came at a price (and I don’t mean the cost of the extra ticket). I had the chance to look at less than a quarter of the tables and whilst I did come away both very merry and (it was an accident guv’ner) another bottle for the collection, there were many people I didn’t get chance to talk to and many characterful and unusual spirits I didn’t get chance to experience. That’ll teach me to hang about watching chefs play with chocolate rather than heading straight into the festival as soon as it opened, that was a crucial 40 minutes that I won’t see again. Manchester’s sold out, so I’ll just have to wait for next year. And the Springbank Tasting at the end of next month. Oh shame.