A python Ordnance Survey map viewer, drawn inside Minecraft, on a Raspberry Pi. Just what the world needs… This will also work for Minecraft drawing pretty much any small image, such as a mugshot from a webcam. 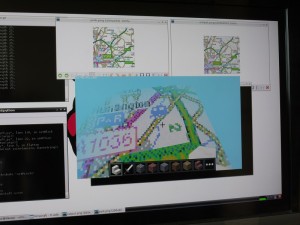 This idea came to me after I attended the excellent Raspberry Jam in York the other month, a great presentation from Martin O’Hanlon and after a chance remark from @charwarz about drawing a rainbow inside Minecraft, Pi edition (hereafter MCPI). It’s really not all that complicated to do (although I might turn it into a full WMS viewer in the future) and it’s a good catalyst for illustrating how to interact with MCPI from Python and also a bit about image handling. It’s just taken me 6 weeks to find the time to write it up..

The first step is to get your Raspberry Pi set up with Minecraft and the Python API to it. This is as straightforward as following the instructions at http://pi.minecraft.net/ to download and extract the tarball. It’s worth noting that this does need X windows, so you’ll need to either plug in a display to your PI or set up a remote X server.

MCPI has an easy to use protocol that listens on TCP socket 4711 by default, but we’ll be using the Python API to it because it saves us writing some not terribly interesting code.

The API’s capabilities are defined in mcpi/api/spec/mcpi_protocol_spec.txt, including a link to http://www.minecraftwiki.net/wiki/Data_values_(Pocket_Edition) for the values for blockType and blockData (more on this later). It’s worth noting that the PI coordinate system is cartesian, but uses X and Z for its ground plane and Y is the vector towards the sky. The origin (0,0,0) is the spawn point.

This is only some of the API’s capabilities, but we can do an awful lot with just this, such as drawing and animating real objects, making games or making glass tiles appear at the player’s feet, allowing them to free run through mid-air.

This is the image we’re about to draw inside Minecraft. It’s from the Ordnance Survey’s 1:250,000 raster map, which is licensed under the OS Opendata licence. From a human point of view, this is a section of a map showing the North East of the city of York, but from a computer’s point of view, it’s a 200 pixel square collection of numbers that can be drawn as colours on a screen.

To transform one into the other, we need the Python Imaging Library (PIL) to do some work for us, quantising the RGB image down to match our wool blocks. To do this, it needs to have a palette defined to match each block to its RGB colour.

One way of working out the exact colour value for, say, the Lime Green wool block (TileData 5) would be to fish out its sprite from mcpi/data/images/terrain.png and then take an average of all the pixels in it. That’s a fair amount of leg work, but luckily some generous people at http://teaminterrobang.com/showthread.php?35959-Minecraft-wool-color-Photoshop-ACO-file have already done it for us, so we can describe our palette in python like this:

The PIL function that converts our full colour image into one with a quantised palette looks like this:

Where mcImage is a PIL image object with its palette set to our collection of colours. We convert our Python data structure into this image using this code: 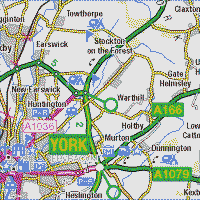 Bringing it all together

The final step is to take our quantised image and draw it inside MCPI by looping through each pixel in turn and calling MCPI’s setBlock() function with the correct position and blockID and blockData values. This is quite a slow thing to do, so it’s good that we’re only dealing with 40,000 blocks.

Once that's finished drawing, we can then fly our around our map inside of minecraft!

As always, my code is up on Github, but the only really interesting file is the Python script quant.py.

Some ideas I've got for future work are to add a small amount of plumbing that would connect a webcam or picam to a MCPI 'TV' wall and to add a python WMS client that would automatically download and render more map tiles when the player gets within a certain range of the tile edge.