Digital cameras often have a rapid shoot mode, where they take still photographs as quickly as they can. I always thought that the maximum rate was limited by the camera’s internal hardware, but after reading Jeff Atwood’s comments on modern USB Flash drive performance, I wondered how significant the memory card’s speed is.

As it turns out, it matters a lot. A modern memory card totally transforms my camera’s performance, letting it shoot at full speed for as long as my finger rests on the trigger. 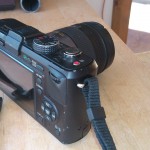 My larger camera is a Panasonic GF1, the most compact of the first generation of Panasonic’s Micro Four Thirds range. It’s a few years old, Panasonic are currently up to their 5th generation GF range, but I’m still very happy with mine. It’s got a good selection of lenses, it was small and sturdy enough to survive a walking trip through the Swiss Alps and I can take reasonably good photographs with it. If I’d ever wished for an improvement, it would be that its rapid fire mode doesn’t come close to a full SLR’s paparazzi mode. 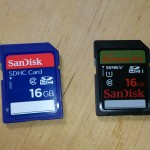 SD card speeds are generally rated as Class x, where x is typically 2, 4 or 10, which roughly corresponds to that number of Mb/s. When I got my camera, I got the cheapest but branded 16Gb SD card I could find, which turned out to be a Sandisk Class 2 SDHC. They’re harder to find these days, but the Class 4 version is a bit less than £9.

I’ve just bought myself a new SD card that’s a little bit faster. Alright, it’s a lot faster. The SD card class ratings stop at 10Mb / second, but the UHS Class 1 SanDisk Extreme Pro (other brands of SD card are available) is rated at a maximum throughput of 95Mb / second, although it costs about £30.

My test isn’t totally scientific: I put my camera into rapid fire mode with my usual settings, reformatted the SD card, and left my finger on the trigger for a timed 30 seconds to see what happens.

With my cheapo card, it takes about 6 shots in 2 seconds before the internal memory fills up and it has to stop taking photographs whilst it saves the jpeg files to the SD card, thereafter taking single photos every 2 seconds, for a total of 17 images over 30 seconds.

Swap over to my new card and it takes photos at its full speed of 3 Hz without pausing to save, indeed the saving icon disappears on the screen between images, giving us a total of 90 images over 30 seconds.

The following graph is an illustration of the timestamps of the images I created. It’s worth noting that these data are quantized to the nearest even number of seconds, so the resolution is poor.

In conclusion, I’m very happy with the faster SD card, it’s like I’ve got a new camera and it should help me out a lot when I’m trying to capture the moment of some fast action. I think it’s definately worth the extra cost, expecially when you compare it to the cost of a modern camera.