Of my recent successes with the ice cream machine, I’d say the Lemon Sorbet has been the most succesful so far. It’s kept by far the best texture in the freezer and it tastes damn good too. The two plum recipes have turned out remarkably similar, even though one’s a sugar syrup and the other is dairy, neither are particularly easy to get a scoop through at freezer temperature though they taste great.

So, here’s my take on one tasty thing to do with the seasonal harvest of pears. If you can’t get hold of local, pure pressed pear juice, then some supermarkets have started to stock it. If you can’t get juice that isn’t from concentrate, then go for one of the apple and pear blends from brands like Capella.

Peel and finely dice the pears and put them into a pan with the water, sugar and cinnamon and gently dissolve the sugar until it’s no longer gritty. Heat it up to nearly a boil and leave it there for a couple of minutes, then discard the cinnamon and let it cool. Once it’s at room temperature, if you like you can stir no more than 1 shot of alcohol through the mix to help it keep its texture when frozen.

Cool the mixture in a freezer until it’s nearly at freezing point. Churn in the ice cream machine for 25 minutes, then freeze again for half an hour before serving in an individual glass with a tablespoon of pear, apple or grape eau-de-vie.

I’m afraid I can’t show you a photo of what it looks like when served, it doesn’t last long enough for me to fetch the camera. This is definately a christmas recipe and is much more popular than the lemon, it keeps its clear clean taste but without the harsh tang of the lemons. 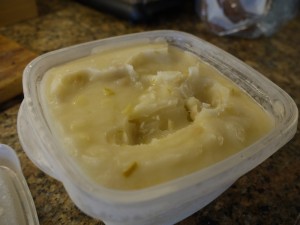