We’re focusing more on the local provenence theme for the second helping of the food festival (from just the three weeks ago now). This time I was lucky enough to be joined by some of my family which made things way more fun, the wine fair especiallly benefited from a sense of smell and having enough people to stand a chance of covering both the whites and the reds.

After a dawdle around the market stands, I haven’t yet found a use for the great slab of Cumbria pancetta from Shaw’s, that could take some eating..

We started back in the increasingly familiar demonstration tent, with another short rant from Food Consultant Phil Leverington about excessive supermarket packaging costing us an extra £465 per year on average. With the cooks from one of Leeds’ vegetarian Indian restaurants stuck in traffic, he stepped in to whip up a demonstration with whatever ingredients he could beg, steal or borrow from their prep kitchen and the market outside. The answer turned out to be wood pigeon breast from Shaw’s meat, with smoked bacon mashed potato (big waxy spuds, not floury ones) and a sauce made by reducing some bramble infused whisky.

The demonstration was interspersed with short talks by the people who produced the ingredients on show. The first up was Rosemary Wass of Newfields Organics, who’s been producing seasonal vegetables from her 25 acre farm in Fadmore for 18 years. We heard from Adam and his Yorkshire rapseed oil, which carries half the saturated fats of an olive oil and doesn’t burn anything like so easily, which is handy when stirfrying.

Topically, we also heard about Nelly’s moorland Shearlings, which I read about the other week. The jist of this community supported agriculture scheme was that each consumer signed up at the start of the 8 month season to buy the equivalent of one (1) Shearling sheep, delivered every four weeks in manageable, ready to cook, cuts. I haven’t yet worked out the difference betweeen Shearling and Hogget, they both seem to be names for sheep that are slightly older than lambs but haven’t got as far as mutton, so should be tender but more flavoursome. Overall, it worked out at £7.50 per kilo which is incredibly cheap when you compare it to 3 week hung longhorn sirloin steak (£24 / kg), and still reasonably cheap when you compare it to supermarket sourced lamb (6-13 / kg, depending upon the cut. or 25 if you get the who-the-heck-would-pay-that-much-for-get-thee-hence-to-your-local-family-butcher-priced rack of ribs). I didn’t bite though, I’d rather pay a bit more and buy it from the local farm shop when and if I want it, rather than signing up for a major quantity of meat that we might not even like eating. I don’t get through all that much meat in a given week, so we’d run the risk of eating nothing but Shearling between now and next Easter. Nice idea, I can see why that business model is in the press a lot in recent years, but I’d need more hungry mouths to feed before signing up.

Most of the afternoon was spent spinning gently round round the Field and Fawcett Wine Fair, which I’ll come onto in a later post, once I’ve finished decyphering and dereferencing our notes (apparently we quite liked table 6 wine 8 and table 2 wine 7. so there you go, another wine fact!).

We finished up with a demonstration from a company that’s been in the city for a year or 148, two people from Rowntree’s experimental kitchens were showing us how easy it isn’t to make Kit Kat’s by hand. They glossed over how they turn the individual slices of wafer into the stacks in the middle of the biscuit, probably either a trade secret or just not very interesting to watch. Like last week’s chocolate demonstration, they tempered their melted choc by working it with a trowel on a marble slab until it got to the correct temperature for adding to the 4-finger mould. By hand, they can turn out several hundred of these each day when they’re running small scale trials of different chocolate mixes.

A few willing volunteers from the crowd stepped up to try their hand with varying degrees of success, mostly the choc wasn’t at the right temperature or wasn’t fully worked into the mould so it all fell apart at the seams. Tasted alright though.

I’ll finish this off with my take on what to do with some hot-smoked duck I picked up from one of the marketeers, a bit like a salad nicoise but with eggs, quick-pickled tomatoes, beetroot and chard from the garden, salad leaves from Thirsk, cider spiked Wensleydale and the smoked duck from (can’t read notes). 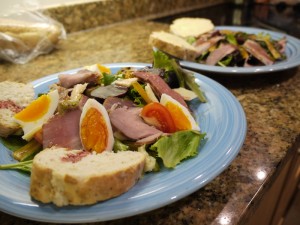