“If only we had some potatoes for tea tonight”

Thus heralded the results of my vaguely scientific trial, does one really need to earth up potato crops to maximise your dinner?

My crop of potatoes were carefully grown in a couple of surplus buckets and started off as a couple of supermarket potatoes that I’d left for too long and had started chitting on their own. They’re one of my favourite varieties, Charlotte, coping well with any use in the kitchen and still being reasonably early in the year.

I’m not the only one enjoying home grown potatoes at this time of year, but I do think it’s one of the more interesting crops to harvest. All you can see during the growing season is an increasingly straggly stem, the mystery of how successful you were isn’t dispelled until you start rooting around for the, err, roots. 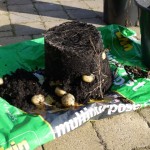 The bucket that I earthed up probably won the contest by two medium sized tubers. The lazy version had quite a few roots near the edges of the bucket but nothing in the middle, whereas the second layer of compost in the earthed up bucket had extras in the middle. It had none in the upper layers of compost, despite the stem and leaves growing on to match. 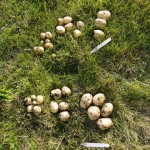 The results. The top row was from a potato left in some compost and forgotten about, the bottom row was earthed up 4 or 5 times over the growing season. 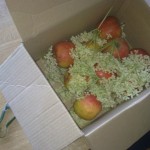 My holiday was well timed to help with another experiment. When we were at the NEC in June, Alys Folwer mentioned that apples packed in Elderflowers for a month came out tasting like pineapples. Well, going away for three weeks seemed an ideal space of time to try it. We caught the tail end of the local elderflower crop, but there were plenty of creamy clusters of flowers in the hedgerows, some were even without bugs. 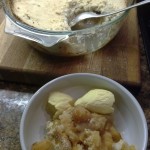 The answer? Perhaps I didn’t use sufficient flowers. They scented the house gloriously for a week, but the apples just tasted like both apples and elderflowers. I probably should have packed the apples in something too, they were somewhat bruised at the end despite not having been moved about. They still tasted good, so we combined them with a few spoons of last year’s Elderflower Cordial and turned them into an extremely summery Apple and Elderflower Crumble. Served with a generous helping of Yorkshire Vanilla Ice cream.