13ish km. 1250m descent. No idea about step count ‘cos I forgot the silly pedometer 2850m up a mountain, an appropriate parting of ways methinks, and a fair excuse for why I need a new one to finish the GCC

A reasonable night’s sleep at the Cabane, great place to be. We were nearly the last ones to leave shortly after 8..

The steep descent from the Cabane was still steep the morning after, the bit with the stream running over the smooth rocks was as interesting as the rope and chain assisted sections. Still hugely faster going down when rested than up when shattered..

We paused at the edge of the morraine section to take a photo or two hundred of the reflection of the morning’s sun on the mountains in a small meltwater lake. The icebergs had noticably melted from last night and another one had calved off the snowfield the path traversed.

After a quick pause at Parking du Glacier for a brief reality check to make sure that we had indeed managed that climb yesterday, we made short work of the flat walk up to the Barrage. Its cafe seemed ideal to pause in for a cuppa, especially with its combination of sheep skins and picnic chairs.

The postbus emerged from the road tunnel like a roaring, err, bus. A Chinese student stepped off it that Paul met a few days prior so he joined us for a chat. He was mostly taking photos on a 1960s medium format, very impressive, tho I suspect it would be first up against the wall when he wanted to downsize his 20kg pack!

We saw a few more british numberplates, including one minibus, which can’t have been too fun a drive. There was some very odd bugling going on at the barrage, which seemed to disturb everybody equally.

After briefly checking that yes it was a long way down off the side of the dam, we motored along the stream down the valley. We eventually found a butterfly infested piece of shade to see what the Cabane’s team had left in our picnic. A doorstop of a sandwich, couple of chokky bars, an apple and a slightly muddy carrot, it turned out. Om nom nom.

Thus fuelled we powered off downhill some more, a long steady descent that was mostly sheltered by the valley walls or trees. We were asked how far to the barrage a couple of times by day trippers, we must have looked like we knew what we were doing or something..

Without much more ado, Bendolla and then Grimentz hoved into view, the end was in sight! A few things looked different, but the old village still looks as photogenic as ever. And finally Hotel Moiry, doing a busy lunchtime service on their terrace and our home for the next 4 nights.

Perfect time to notice just how much sun I’ve caught in odd places, find a salt lick to compensate for how white some of my gear has got and doze on the balcony. Not in that order. Zzzz.

Unexpectedly the pizzeria was closed, so we had some fancy salads with wild flowers and a major cheese fix (on toast, I hasten to add) 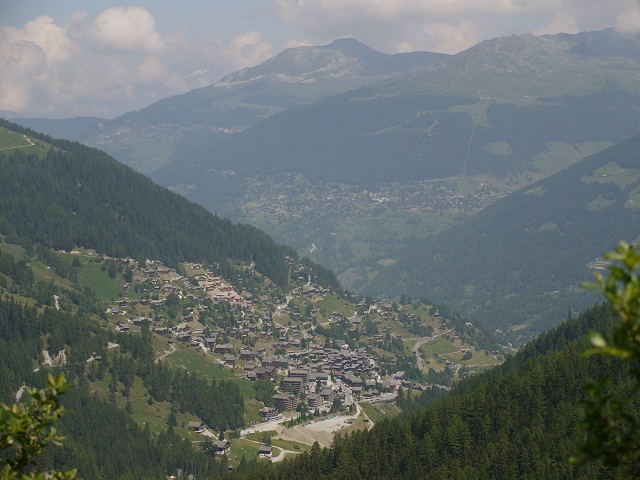 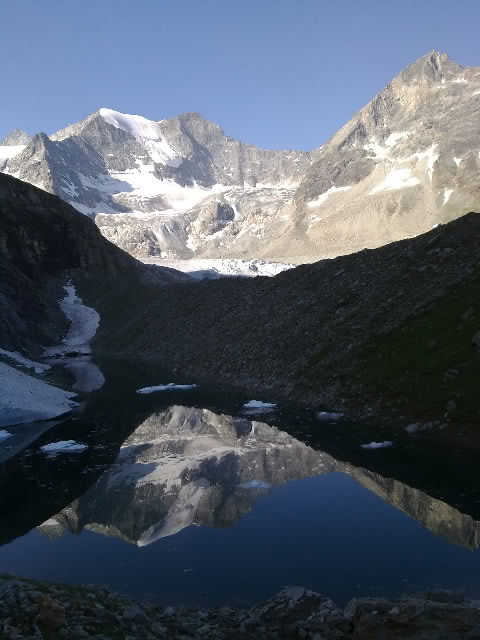