eeish. How did we survive that one? great end to a tough day.

It was our hardest day so far, longer and more challenging than even the approach to Louvie, tho less technical. I credit Paul’s stash of Haribo winegums for keeping my mind working on that last scramble.. We compared our route to Kev’s and his estimation was low, even taking into account our bus hop from Les Hauderes to La Forclaz. We measured it with string to even out the kinks and had us giggling in disbelief.

We managed our early start, leaving the hotel bang on 730, including a detour to take on water from the village fountain that should have been plenty to catch the 739 bus up the hill slightly. Or it would have been if it was a Saturday so we’d missed the 728 bus by a couple of mins after misreading the timetable. Oopsy do. Rather than sit around for a couple of hours, we walked back up the valley to Les Hauderes in ideal cool, fresh conditions. The 4km took us about an hour so we had a bit of a wait in Les H.

Joined the popular postbus up the valley as far as La Forclaz, the morning was made by 2 Australians struggling a bit and wanting a return to ‘as far as you go’.

Our chosen route zig zagged upwards very nicely through a couple of hamlets and forests, it added miles to the flat distance but was hugely more satisfying than barging directly up the side like everyone else was. There wasn’t much in the time either.

The final slog from 2580 to Col Du Tsate was seriously unpleasant, the crow soaring overhead on the thermals might as well have been a vulture. It probably took us an hour to do the last 300m scramble up to a well earned lunch just before 2pm.

We met a British couple, she ran a trekking business and was seeing about gluing some of days together, with a goal of C-Z in 11 days. E.g. pulling Cab de Prafleuri through to Les Hauderes in one 11 hr day. It was interesting to see how light the professionals travelled (and how fast they walked!)

The descent into Val de Moiry was much easier than the way up, there was even evidence of people sledging down in the snow! We were rewarded with a growing view of the Lake, the Glacier and the surrounding mountains, not to mention playing the ‘spot the hut’ game on the far side of the valley.

Paused at the busy Parking du Glacier for a tea and a cereal bar before focussing our depleted self preservation instincts on the climb upwards. The Buvette (drinks and snacks vendor) had a couple of signs up. The first was ‘we sell ice creams’. The second was ‘we’re sorry, we can’t sell ice creams because an avalanche took out our generator’.

The last leg was only another 1hr 25 sign time, how hard can it be?

The route was a steady 100m climb up to a ridge of glacial morraine, easy underfoot until then. If you’re not happy with striding edge, I’d advise against looking down there, a couple of bits were quite narrow, though we didn’t notice it at the time.

It finished with a seasonal snow field traverse, a bit of a scramble and a steep zigzag path to get us up the last 300m to a tremendously welcome sight, the Cabane and its only just opened, copper clad, extension. The view from there over the glacier is just breathtaking, which is one of the reasons that half the wall is window.

Being right at the head of the valley means you’re surrounded by mountains, the horizon is overhead and all jaggedy and interesting.

Long and varied day with many successes and a lot of pain, not sure why this triumph ended on a huge high rather than the low of last time, perhaps only being exhausted rather than ill helped.

Nowhere in uk could we have done that, 2.5 snowdons maybe?

really good evening at the cabane, good crowd to chat to. Mountaintime def in obeyance: Dinner at 7. Breakfast 6 till half 7 with most of it gone when we surfaced at 7. Every bench full, a good craic on. Met one army bloke from north of catterick, training to be mountain instructor, a scary level of fitness and ability in that crowd, military scale of brewing up 🙂

Met another london bloke who seemed to be doing shuttle runs between chamonix and zermatt! 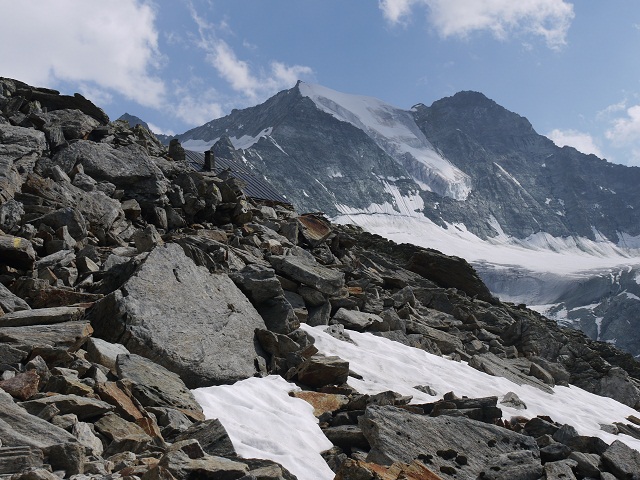 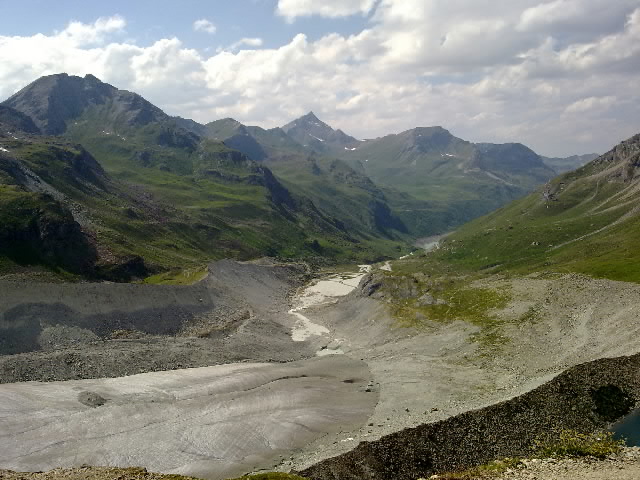 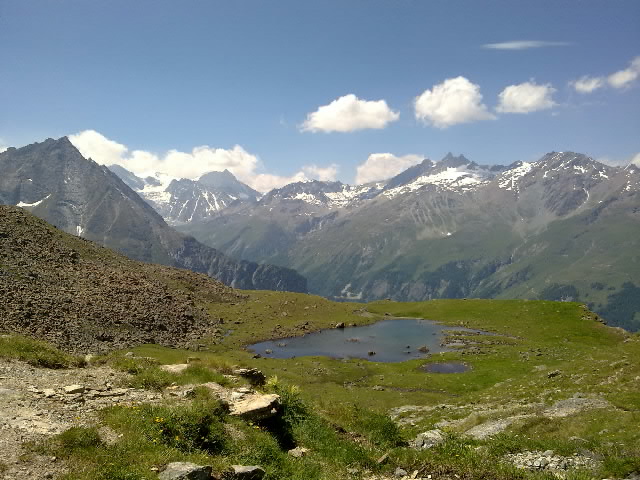