Despite a number of learning points and high points, I decided yesterday was too much. This is supposed to be a holiday and I was only remembering the bad bits instead of the good bits. No idea why my body was failing so miserably with altitude, manflu, nose bleeds, sun and so on but it was definatly not cashing the cheques my ego was writing.

My decision to avoid the high (and best bits) having been taken, Paul and I shook hands to meet in Evolene in 3 nights time and we headed off in opposite directions. My story takes me in the easiest way back to civilisation and public transport, about 1000m of straight down.

I set off early to help avoid a lot of the day’s heat, but the path down to Fionnay was hard. Narrow, rocky, steep with some patches sheer enough to need chains on both sides (Still don’t look down dot com). The flies kicked off when I got back into the treeline and I started to pass a fair number of people heading up, they must have either been annoyingly fit or set off at 6. Or both.

A few clearings had a lot of vegetation in, walking through them resulted in a cloud of butterflies, very pretty but far too fast to take a photo of them. The views down the valley towards Le Chable were good, but the Mauvoisin barrage dominated proceedings up the valley. I entertained a few thought of heading that way to go explore a little, I had the time to use after all.

A rustle in the undergrowth to my left heralded a marmot’s tail running away, but it ran straight up a rock and froze, watching me take a photo or two of it posing. Yay!

Got to Fionnay after about an hour and a half, 50% slower than sign time. That and looking up at the opposing valley lead me to wonder why I thought that was going to be a good way to finish a long day’s walk from Cabane Col de Mille. Rule 1 again..The postbus ran up this valley only a couple of times a day, so I was faced with a 2 hour wait in Fionnay. The lack of busses also put paid to dam exploration, with nowhere definite sorted yet for that night, low risk is good.

The next major village and stop, Lourtier, was 1hr40 sign time further down the valley, so walking seemed a more interesting option than lurking in a car park.This path was long but fairly steadily downhill and dodged in and out of trees to help avoid the sun. Eee it were hot. The path was much more direct than the road, though it included a few road sections as well as the often seen footpath cutting across doglegs. Most of those road sections were extremely dug up, perils included piles of plastic pipes, trenches, spoil heaps, new road surface and the odd JCB. Judging by the tracks, somebody had been over there on a bike and had some fun jumping stuff.

I got to Lourtier after about an hour, so I shredded sign time, at the expense of some dignity. Drip drip etc. I passed the postbus heading up the valley and had about an hour to rest in the centre of the village outside the shop. The architecture was really fun to look at, any number of odd bits and pieces were put in between the houses.

I cooled off eventually and munched the picnic I’d carried down from the cabane whilst watching the world go by. It was a narrow street, I wondered how the coaches got through it. Turns out: carefully.

The bus took me on a good tour of Val d’Bagnes, was fun to see the change in building styles from wood to stone to concrete as the settlements got bigger. Swapped to the train at Le Chable and watched the world go by some more.

Apart from watching the vines growing on the hillside terraces, I saw a museum of st. Bernard dogs from the train on the outskirts of Martigny. I’d picked up a leaflet about it, but it was miles away from the station so I didn’t even try going, I suspect I’d more than a tot from his barrel to revive me after a couple of miles in that heat.

I poked around Martigny for just a few minutes before giving in to enuii and headed for Sion. Just missed the fun of catching a TGV there so settled for taking photos of the vines and fruit trees that plastered the centre of the wide valley from a Regio-Alp train.

Got to Sion and my mood dropped again. What was I doing here? It’s ridiculously hot, the buildings aren’t welcoming and I’m the only one in sight with a backpack. I dripped and stomped my way to the tourist information, to find it had closed half an hour ago. This was 1pm on a Saturday. Thankfully they’d put hotel listings in the window so I dripped off in search of a couple within budget. Missed them, but found a Best Western who didn’t automatically say there was no room at the Inn for a hugely unimpressed backpacker.

Not cheap, but hey, desperation.Made myself presentable and availed myself extensively of the inclusive wifi and my mood had lifted again. Sion is the county town of Valais and its twin hill forts and historic old town combine well with a huge number of top vinyards to make for a fun tourist experience.

A plan was formed, I started to text Paul to let him know what I was up to when he rang to say his day hadn’t gone to plan, and could I please ring the Cabanes for him to say he wasn’t coming. I’ll let him tell his own story, but oh boy was that not a fun day’s walk. For those reading this who know what I’m talking about, it was his Snowdon Moment.

I bagged him a room where I was staying and then set off to go play tourist and take a lot of photos.

The Valais history museum was really good, a post unto itself, and the town was quite pretty, even when taking a thunderstorm to the face.. I chatted to a friendly couple from Worcester who had just left the weekly recital from the circa 1300 pipe organ that was here, apparently just the 1 manual and well known in the organing world. Oh well, maybe next week. I had to make do with somebody playing the piano with the window open in the old town.

Speaking of which, Sion’s old town is very picturesque. Its main street is one huge bridge over the river, with some wavy engraving on the cobbles to symbolise it. The architecture and the various slopes, nooks and crannies were great, just my sort of building. A bit like York or Chester, but better.

Dinner was a reasonable Italian, salad, pasta and I let myself have a 3/8 bottle of good Fendant instead of the usual cold busting drugs. Mmmmm. 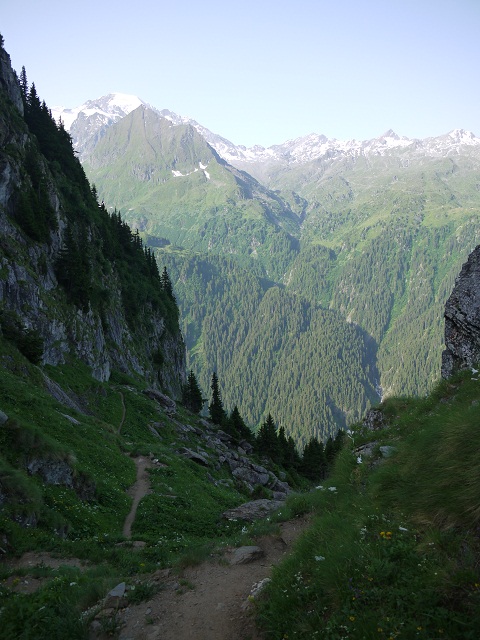 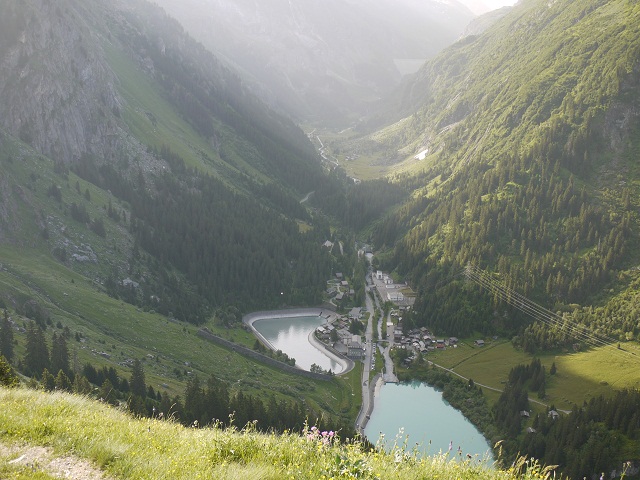