Lazy start with Breakfast at 8. everything just seemed to take forever this morning for some reason. After a brief disagreement with the credit card machine (signatures seem so retro) we bid farewell to Hotel Ermitage and got on our merry way.

Well, as far as La Poste anyway where a helpful postmaster helped send about 1kg of Paul’s stuff on to Grimentz.

Dinner last night was a properly thin and crispy Pizza au 4 Saisons ate on the terrace, looking down the valley. We were hiding under a parasol, but there was free suncream for those braving the evening sun.

Once we’d got up the hill from Verbier, the first leg of the walk was nice and easy. A relatively flat track that let us get a couple of km under our belts and at least keep up with sign time.

However, we had to eventually turn onto a narrow path that seemed barely adequate to walk along, so imagine our surprise when a group of mountain bikers came along on a day trip from Martigny.Have I mentioned how hot it was yet?

After a bit of map reading to make sure we weren’t affected by a signed path closure, we turned off uphill at Le Mintset on what the map suggested finished with A Hard Bit before Col Termin.

We quickly learned why the maps have different labels for the Walking Paths and the Mountain Routes. Challenging slopes, slightly dodgy ‘where’s the path going now?!’ navigation, chains to hang onto when reading from the book of ‘no really, don’t look down’, steep scree traverses, steeper snow field traverses and other such peril.

I found the scree boulder fields to be mostly fine underfoot, benefits of long legs I guess, but I casually leant against a rock, which promptly fell away in my hand. Oopsy doo.

The snow, on the other hand, was more annoying. It was nice and cool on my hands and feet, but very slushy and slippery. Definately a case of maintaining 3 points of contact at all times, leaning into a stride led to your boot moving unexpectedly.

Speaking of being allowed a little bit of peril, there was one section clearly signed ‘rockfalls, stopping is forbidden’, it contained a couple of scree traverses and some snow and this is where we caught up to another couple of walkers who were less certain underfoot. I was mostly looking up nervously, but was still glad that I didn’t see the cause of a thunderbolt-like rumble or 2 behind me once we were safely across..

.We met a lone chap walking the other way, he was across the snow and scree without breaking a stride, we figured it was mostly technique with a twist of wanting to be across as quickly as possible.

The final slog of up was properly steep, esp in that heat. I didn’t have much of a sense of deja vu when we got to Col Termin, despite having walked much of that route in 2003. Good view of Grand Combin and back towards Bovine though.

I did pause a few times to take more photos of some of the alpine flowers, I love how a plant so small can throw out flowers that good. I wonder what the names are and whether they’d grow in Yorkshire.

We were warned of some late snows up high in the sheltered passes, including above Grimentz.A quick bite of snackage at the Col and we started down, down, down (and rebound) to lose the 400m to Lac de Louvie, a dammed lake in a natural hanging valley. The whole basin was very picturesque, handy to take our minds (if not our eyes) off the dodgy path and steep descent.

Reasonably well developed valley, including a few stone storm shelters, one labelled in French ‘abandon hope all ye who enter here’. Not sure where the wood came from for the ashes of a campfire, we’re way above the tree line here.The Cabane was a most welcome sight, the guardians showed us around whilst we tried to un-zombify ourselves.

Paul was back to himself after recovering quickly, but I was starting to struggle. Rehydrating from the lovely cold water was nice enough, but the sun and lack of lunch had drained my IQ solidly. It wasn’t helped when my nose kicked off again from the altitude either. Not a good couple of hours.

The Cabane was privately owned and run well, very impressive facilities. Only 10ish people booked in for the night so we only had to share the dorm with 2 others. The shower was generous, 4 doses of 30seconds each. Nicely hot and I remembered the lessons from Prafleuri last time so was done before the first 30secs were up.

I didn’t unzombify until I’d got outside dinner, soup and plenty of lasagne with refreshing water melon for afters. Dinner kept the guardians busy, a couple of groups of young fit types ‘popped up from the valley’ for food and chat. This seemed impressive at the time, doubly so after I’d done that descent.

We shared a table with a couple from near Martigny who knew the area pretty well, but only spoke enough English to go on holiday. It was fun practicing my French to find out what’s good to do in the area that isn’t mountains. Learnt about the famous Chemin de Vignoble (vinyard path) and a couple of good organisations to look up on the web, as well as the Bisses of Valais; a collection of mid height walks along waterways. They reinforced Paul’s good opinion of Sion too. 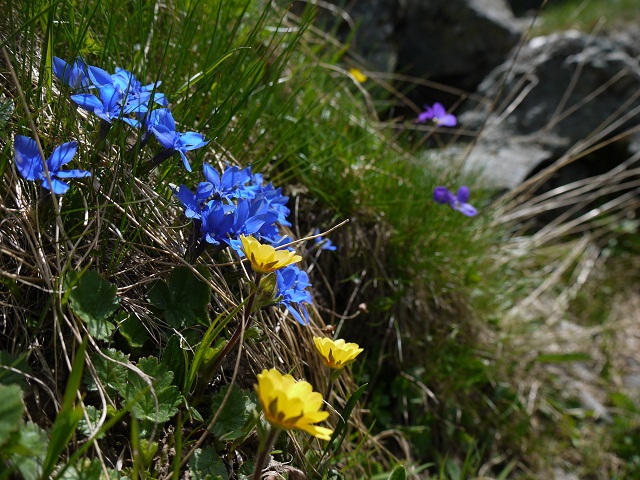 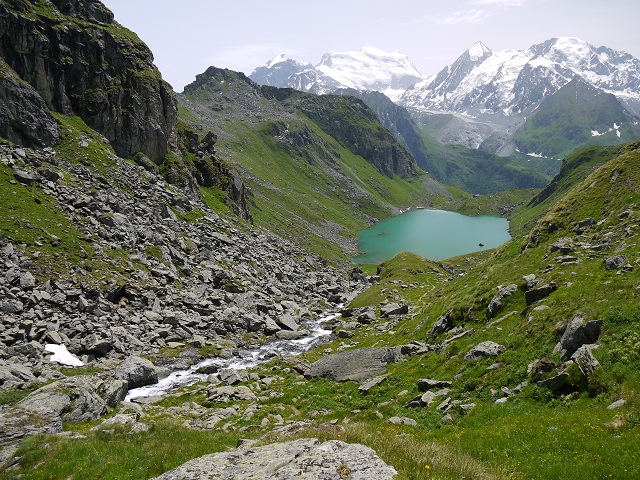 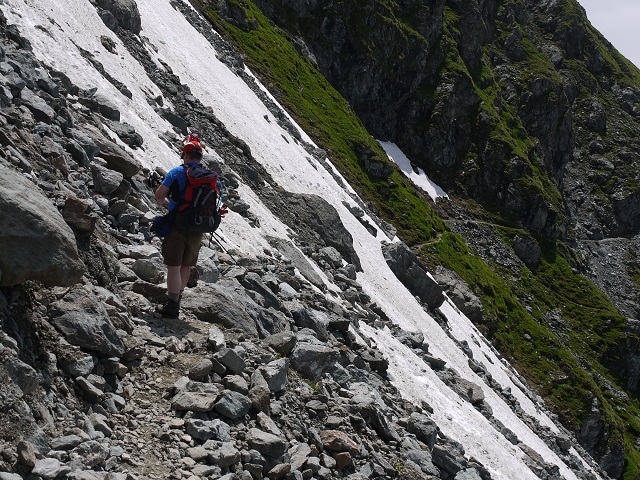 One thought on “Day 4 – Verbier to Cabane de Louvie”