This was the scene at a most surprising hour of a Saturday morning a month ago, when I was having second thoughts about agreeing to come along to Berry’s first outing at a One Day Event. Despite having heard about Eventing for a few years, and been along to a couple of international scale events at places like Bramham and Burghley, this promised to be an interesting day out. To set the scene for the viewers at home, it goes a little something like this: You take a horse and a rider, take them both along to a formally organised Event where, along with dozens of others, they compete in the three disciplines of Dressage, Show Jumping and Cross Country. The ultimate challenge, as it were, for the skill, fitness and partnership of the horse and rider.

Thankfully it turned out to be a nice sunny day for it, without much wind so my Tilley Hat stayed put.

The logistics involved in attending something like this seemed quite involved, but aren’t much to write home amount, unless you enjoy 6am starts or spending an hour or two towing a horse trailer around the countryside, or making sure that you’ve got all the saddles and other paraphenalia ready to grab at the right time. We knew we were getting to the right place when we joined a steady stream of other horse transport heading in the same direction.

There were a series of large fields set up as parking, which was the first indication of the scale of how many people compete in these events. People were arriving every which way, deploying trailers and horses and generally setting up camp. Jokes about women drivers would have fallen on very deaf ears, the riders were mostly young and female and they generally did the driving, be it a car and trailer, brand new 3.5t campervan style apparatus or full on 10 tonne HGVs. Our arrival was more akin to the coal powered truck from ‘One of our dinosaurs is missing’ but there were a few big and shiny 40′ affairs that were much closer to the high tech transport in ‘Universal Soldier’.

It was clearly a day out for all the family, either because it was fun or because the rider wasn’t old enough to drive yet or because competing ran in the family, people seemed generally chatty, provided they weren’t late for their start time or trying to quickly change both their uniform and their horse’s tack within the same 10 minutes.

This was an Unaffiliated affair, but it still had all the elements of a proper event, from the commentators box with vintage sports car parked outside, to the butty wagon making sure everybody had a steady supply of bacon and cheap tea. Even though it’s as far from the UEFA cup final as a sunday league country final, it still had people travelling from all over the place.

I can’t quite decide whether I like the idea of Dressage or not. On one hand it’s a contrived torture test that requires the rider to memorise a series of choreographed sequences of movements that come from a book of other very similar series of movements. I would really not like to have to quantitatively judge a class of 30-odd horses all trying to do the same thing, it’s bad enough trying to keep some contrast between 6 interviews over a day. On the other hand, it’s a precise and measurable test of a horse’s deportment and a rider’s control that presumably makes for very good training. 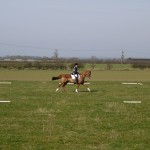 Show jumping’s ok though, each round is over in less than a minute and is more fun to watch because there’s the measurable success of how many poles the horse knocks down on his way past as well as the course builder and the clock to beat. It’s generally in a small area and is where the spectators generally gathered, often to the annoyance of the professional photographer for the day. This was a good opportunity to test out my new camera, it doesn’t (yet) have a terribly long lens, but its rapid fire mode means you can take series of photos like this:

Finally, if you haven’t been eliminated yet, there’s the cross country course. This is similar to show jumping but the jumps are solid (so you’re landing in an undignified heap if you hit them rather than just getting four faults) and it’s over a much longer distance so your horse and rider have got to be much fitter. There’s also a wider variety of jumps to contend with, including the dreaded water. This is what everybody wants to do because it’s fun, dangerous and looks cool on TV. It’s also the expensive bit, which is why most of the obstacles are named after their sponsors. The commentator must feel like a bingo caller with things like “and there sets off Number 37, with Jane Smith riding A Rather Contrived Horse Name the Third”, “getting good clearance over Toadally Clean Log Roll at One” and “looked twice at the Harwood Organic Vegetables Hazel Brush at Six”. 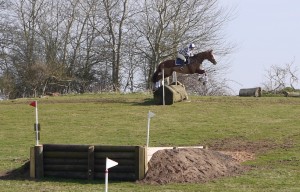 When I was walking back to the parking area after Berry had finished (it made me grin when Berry’s name, number and rider was announced over the PA system, Ma Poneh!) there was a perfectly calm announcement “Be aware, loose horse at Four”. Next thing I knew there was a dozen people in yellow jackets sprinting in that direction, followed by two kids on a quad bike and then a roar of a busy V8 as the St John’s 4 wheel drive ambulance crested a rise with all four wheels off the ground. All was fine as it happens, but it was still dramatic.

We didn’t win any cups that day but it was a very promising first Event and was fun to match and to see what all the work is for. I’m still not convinced that it was worth the 9 hours of gubbins, but it’s better than a similar amount of messing about for a 60 second trip round a show jumping course.