Obsidian Entertainment seem to have based their business model on producing reasonable sequels to Bioware games and their latest offering is more of the same. Alpha Protocol is an Action RPG that will feel very familiar if you’ve played Mass Effect 1 or 2, albeit in a current day Secret Agent format with your character trying to save the world in a cheesily single minded way. 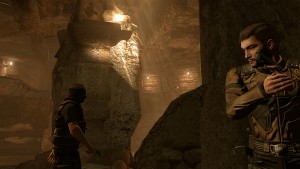 The strapline “your weapon is choice” is appropriate, with well over half of the game being driven by dialogue and character interaction. The conversation trees are immense, each of your character’s responses can be either ‘Professional’ (think Jason Bourne), ‘Suave’ (James Bond), or ‘Aggressive’ (Jack Bauer). To spice things up, you generally get about two seconds to make a non-default response, which if you blink or pick the wrong option can lead to a very different outcome.

The action sequences are good and generally exciting, the graphics provided by the Unreal Engine are stunning and smooth and it plays like any cover-based first person shooter. There is some attention to detail, headshots notwithstanding you can make your enemies stumble or fall over by running into them quickly or shooting them in the leg. You have to pay attention to the sounds your character is making, if you run by mistake then you will be heard through walls and doors, gunshots are a real give away. I got very good at hacking control panels to shut off all the red alarts I triggered in the first few missions.

I found sneaking about the place to be the most exciting and satisfying approach, placing great importance on stealth, precision pistol shots (with tranq ammo I hasten to add) and a good old fashioned boot to the face. Others might prefer to go fully gadgeted up, or just wade in like Arnie with the assault rifle blazing. Once you’ve got the ‘awareness’ skill to a level that puts little arrows above each guard’s head, you can have great fun creeping in between guard’s patrol patterns to evade them completely.

Now would be a good time to mention that this is very much an Obsidian game. It’s not polished to perfection like an offering from the likes of Bioware or Valve or Blizzard, this game was written for the consoles and then ported to the PC. Most of the bugs, and there are many, are documented on the official forums, but there are many features that are clearly designed for the lowest common denominator.

The worst offender is the save game system, it’s checkpoint based and is designed to not let you go back and replay each sequence until you get the outcome you had in mind. This has the side effect of making you really value each conversation option, each bullet fired and consumable gadget used, as well as considering which path you’re going to take through each room to avoid the most patrolling guards. It adds about one part excitement and four parts facedesking fustration.

The console style UI makes things like skill and gadget selection harder than it needs to be, so I pretty much just didn’t bother with them apart from using the unbalanced combination of ‘Covert Operative’ and the pistol ‘Chain Shot’ to make boss fights easier than they need be. There are two or three independent menu systems that are easy to get stuck in, the mouse control of the UI is tentative at best and it’s far too easy to press the wrong button in the heat of the action.

It’s a very enjoyable way to spend 12-15 hours once you’ve learned how to play the game and can accept it as an imperfect gem. I’d give it a very solid 7/10 and a great way of passing a rainy week at home.

If you’ve got the patience to wait for the Royal Mail, then Amazon is a good value place to get it, otherwise Steam will save you the trouble. I tried to buy it in an actual shop, I figured a car and a DVD was quicker than my home internet connection, but apparently just about everywhere has stopped selling PC games.