Yesterday was a glorious day to be out walking in the Dales in one of the areas I know best. I don’t tend to get out to Ribblesdale very often because it’s about 2 hours drive away and there are other equally nice areas of the Dales to explore closer to home.

The route starts in the National Park carpark in Clapham. At the time of writing, it costs £3.50 per car per day, which I think is a fair donation to the Park. Whilst the group assembled, we had an impromptu lesson in how to turn a tree into a hedge, by bending the branches horizontal, growing out the newly vertical shoots and then bending those down again, repeating until you’ve got the shape you’re after. Apparentely it works with most trees, not just ash and willow, although cherry is too brittle to get away with it. 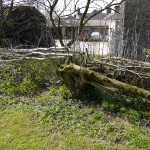 The walk starts very gently, steadily gaining height through the woods alongside Clapham beck. You can pause at the shop at the Ingleborough show cave for a last ice cream before the path breaks out into the moorland at the top of Trow Gill. My new camera was earning its keep both along the lake and during the easy scramble up through the Gill and into the rolling hills of Clapham Bottoms. The sky was hazy, but clear enough to see the summits of the hills around, so often the peaks of Pen-y-Ghent, Whernside and Ingleborough are shrouded from view by the cloud. 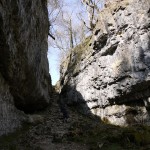 This area is sheltered from the wind and the baking sun was certainly making its presence felt on a few of us, fleeces, gloves and jumpers were being stowed at every turn. This area is very popular with climbers, both above and below ground, I wouldn’t have fancied carrying full caving gear along in that heat. 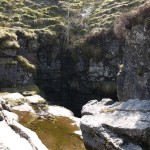 We weren’t along whilst pausing for lunch in the natural hollow by Gaping Gill, watching the steam rising out of the depths to the sound of the water trickling past.

The wind returned strongly once we left the shelter and started up the ascent to Little Ingleborough, the going was well paved underfoot and our merry band spread out into the tortoises and the hares. Some consider the views from Little Ingleborough to be superior than from Ingleborough itself because it doesn’t have the same plateau limiting the horizons. The rocky area lends itself well to making shelters from the prevailing winds, which we were plenty happy to make use of whilst the rest of the group wandered up the hardest of the day’s climbing.

The last leg along the ridge to Ingleborough’s plateau was easy going under foot, cold, but with some big long views across the fells to distract us from the elements. It was as popular as ever, with walkers going every which way, from Duke of Edinburgh training groups to Three Peakers passing through. There was a queue of people getting their photos taken at the trig point, although jaws dropped in amazement all round as two of our Walking Club got engaged there! For the second Saturday in a row, my camera’s rapid fire mode was handy.

The lack of clouds were nice when we left the plateau heading south of Simon Fell back towards Horton-in-Ribblesdale, it’s all too easy to miss the various paths from the top. Although ‘accidents’ do happen and the Hill Inn at Chapel Le Dale is one of the few places I know that serves Riggwelter on tap.

The area’s geology comes to the surface at the Sulber limestone pavement, although we followed a surprisingly well marked track around to its West. Be careful if you stray across the open moorland to try to cut the corner off, there are bogs, peat mosses and plenty of pot holes to take you by surprise.

The walk finishes along one of the more tedious sections I can think of, the very appropriately named Long Lane. An number of cyclists bounced past us down its long, straight and rocky descent back to Clapham.

We weren’t in much of a hurry, so took a good six and a half hours to walk the 17km or so. I’ll upload the photos to my website properly at some other point, for now though you can get a few from the slideshow I’ve uploaded to Everytrail: