Ah, Scarborough. One of the country’s oldest seaside destinations and probably the county’s best known, it’s got something for nearly everyone. 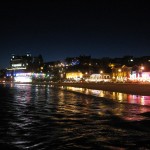 Promenade on the South Harbour

We arrived shortly after dark, about half past 4 and drove around until we found a likely looking car park just next to the RNLI boathouse. Amazingly for this time of a Sunday evening, one of the shellfish kiosks was still open, selling pints of prawns, dressed crabs and so forth. Great stuff.

Walking along the beach was quite bracing, but was still quite jolly with the lights from the barrage of amusement arcades reaching as far as the surf. 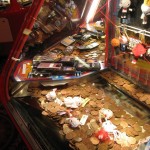 The tupenny shove machines have certainly gone up in the world since I were a lad, with everything from cuddly toys to cardboard mobile telephones balanced on the edge of some very sturdily stacked two pences.

The gardens were well lit and provided a scenic distraction from the steep walk up the side of the cliffs towards the town, the paths had steps and ramps for all constitutions. 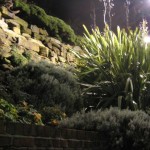 Tea was provided by a handy Weatherspoons, with some well kept and entirely refreshing Ruddles Best thrown in as part of the meal cost, although at £1.35 a pint, well worth drinking anyway. I’m quite a fan of Ruddles County, but it’s not really a session ale, but their bitter was just as good, without the unpleasant aftertaste you sometimes get from cheaper brews.

Anyway, the point of visiting the seaside was to attend the recording of the last two episodes of the current series of I’m Sorry I Haven’t A Clue, some of the finest comedy our country has to offer. For those of you who haven’t heard of it, get thee hence to the iPlayer and do some revision.

This was the third time I’ve been able to see it live on stage and featured Jo Brand as a guest for the first time and Jack Dee in the Chair. He’s not a patch on Humph, but then it would be a waste to try to emulate him, Jack Dee’s certainly funny enough in his own right.

I wouldn’t want to break theatre etiquette by taking a photograph of the stage inside the auditorium and besides which, my pocket camera wouldn’t get a good enough image anyway. If I did, it would probably turn out looking like this: 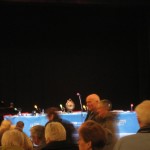 The recording took about three hours, including a 20 minute interval so the performers could get a brew, which was incredible value for the five pounds the tickets cost. I wouldn’t fancy the job of editing that down into two 25 minute episodes.

Some of the funniest moments were those that would end up on the cutting room floor, Jo Brand tripping over on her first attempt at One Song To The Tune Of Another and taking a good 5 minutes before the rest of the panelists would let her recover her composure. Jeremy Hardy getting Jack Dee to crack up and one very brave woman in the audience getting carried away and singing out the answer to the ‘guess what the audience is trying to hum’ round. You’d never see the deadpan expressions from Barry and Jeremy as they calmly produced ribbons of jinglebells to join in with.

Jon Naismith did as good a job Producing it as always, he does the audience warmup himself (with the same jokes he’s been using for years – so much that Barry Cryer helped out with a metajoke: “you used the joke about the condom? You’re only supposed to use it once!”.

Even recording the pickups was hilarious, had to wait for the audience to quieten down after Jon Naismith asked Jack to say again “and here’s the mystery voice for the listeners at home and this time leave a gap so I can actually DO the mystery voice”. Which of course led to Jack miming “one, two, three, four, five” when he had to say it in the second show 🙂

I wouldn’t want to spoil anything from the shows, but one entry from the Uxbridge English Dictionary that bears repeating was “Canapes: a scot unable to spend”.

I’ve already got the PVR primed to record these two episodes the next two Mondays, it will be interesting to see what I can remember about the bits that are cut out.