I’ve had a post about kitchen knives in my website’s drafts file for a little over 18 months now, but it’s been hard to knock it into a sensible shape. I’ll probably follow up with one about whetstones nearer Christmas sometime, keeping your knives sharp makes the world of difference.

For now, however, I’m going to contain myself into a bit of a rave about my latest toy. It’s one of those tools that’s going to have to last my lifetime, but I’ve recently succumbed to temptation and treated myself to a Santoku, made from Damascus folded steel by Tojiro.

After deciding which knife to get, there was a lot of shopping around to be done. It turns out that the cheapest place was York’s very own Barnitts! Whilst they had to order it in especially for me (“these don’t exactly fly off the shelves you know”), it was still £45 cheaper than the RRP. This isn’t exactly an impulse buy, I don’t part with that much money at all easily, so being an Engineer, I made sure the specification was right before I chose my product 🙂

Unlike its cheaper counterparts from, say, QVC shopping channel, the pattern isn’t so much painted onto the blade as reflected out from inside it. Beautiful stuff. 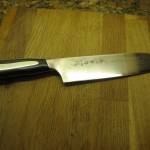 It wasn’t just the appearance that I chose this material for the blade, however,I wanted steel that was malleable enough to be able to be sharpened but hard enough to keep its edge once it got it, anything over 60 on the Rockwell scale would do. I also wanted a sensible grip on the handle. I’ve tried a few other knives, IO Shen were good, but I felt were edged out by Tojiro. Despite their innovative sharpening gadgetry and the genius marketing man that is Mr Global, Min, I don’t rate Global’s style at all (although they sell a huge volume of good quality knives to Western Europe, so I’m in the minority with this opinion).

The weight is perfect for me, it’s heavy enough to have a heft of its own and unlike my French knives, the balance is slightly forward of the handle which makes my life easier. The shape of the blade is a great compromise between piercing, chopping and rocking whilst still being thick enough for me to rest my knuckles against whilst using (big hands aren’t always a bonus). Whilst I will still use my 6 and 8 inch Sabatier cooks knives, it’s immediately clear why this shape of blade outsells all others in Japan.

I thought I’d used sharp knives before, but Oh My God. I chopped a stir fry this evening and I eventually had to be told me to stop giggling before I cut myself. Not a chance with that knife, it was completely controlled. I wasn’t bored enough to make a video of it, but this will cut through a ripe tomato, perfectly, under its own action alone. No need to put the point through the skin and cut back through it, or to draw the cutting edge across the skin like a serrated edge.

It literally cut through vegetables as if they weren’t there. Now I begin to underst how TV chefs do their rapid fire showing off action, they use properly sharp knives.