I suspect it’s pineapple season in the southern hemisphere at the moment because they seem to be going half price in all the supermarkets. I’ve had one sitting in the fridge for over a week awaiting a bit of time to do something with it, I didn’t quite get around to my original plan of making a spicy chutney out of it to go with curries, so I simply preserved it instead. 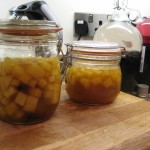 I didn’t really follow a recipe as such, just roughly cubed the pineapple and poached it in a light syrup along with a couple of sticks of cinnamon, a teaspoon of ground ginger, half a dozen cloves and a star anise. Then stored it hot in kilner jars so they would vacuum seal. 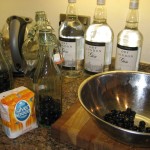 I had the chance to pick a couple of kilos of Sloe berries last weekend so we could finally get around to making some Sloe Gin. It’s too sweet for my taste, but I know plenty of people who do like it. Buying a year’s supply of Gin all in one go was a bit wallet stretching, but it’s not like it’ll go off. 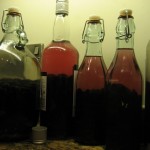 The Sloe Gin recipe was a bit loose, but went along the lines of about 1 pound of berries and 100g of sugar per litre of gin. Or as J tells it: “Half fill whatever sized bottle you’ve got with Sloe berries, add a couple of handfuls of sugar and top it off with Gin”. Then turn it once a day for a week, then once a week for a month and then once a month until you’ve run out of patience and want to drink it.