This weekend sees York host probably the largest of its annual Christmas events, St. Nicholas Fayre. Which for me, at least, was an excuse to wander through town in the late afternoon, enjoy meandering through the heaving crowds and generally seeing what there was to see, preferably over a polystyrene cup of steaming hot punch. 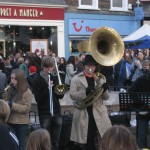 The sound track was provided by a local dixieland jazz band playing christmas carols, I forgot to note the groups name, but I’m sure I recognised their trumpet player from the old Wednesday night jazz jam session in the Black Swan from a year or 10 ago. 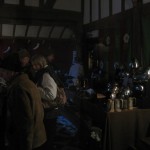 Barley Hall was doing it’s usual historic market, with stall keepers dressed in costume and happy to cater to all of your needs, provided they can be made from hand stitched leather, hand woven wool or properly blacksmithed.

One brand that’s really taken off this year is delicouslyorkshire who had taken over the top end of Parliament St with their usual made in Yorkshire market. My bag came out a good deal heavier than it went in..

I try to make a rule of not shopping round a supermarket when hungry, but that should also apply to markets. I stopped by Cross of York to see if they had any fish left for dinner tonight and was reminded of how good a skilled fishmonger can be, watching them fillet my choice of fish ready for the pan. So tonight will probably be pan fried butterflied-fillet of Trout on a bed of steamed kale with a sage risotto, followed by a baked apple because it’s cold and dark and I like that sort of thing 🙂

Baked goods aside, I didn’t really achive much Christmas shopping, I did pop into Borders to see what the effects of its administration were. The 20% sale coupled with the seasonal pile of customers led to an epic queue, so I’ll leave that shop until next time I’m in town.

Speaking of which, next weekend’s looking busy with a walking club trip to the famous Lion on Blakey Ridge, and the weekend after is my second favourite (after the fortnight’s worth of Food and Drink Festival) time in York, Festival of Angels.