This morning’s weather could be summarised thusly: horrid. Thankfully the rain went away and the wind died down to the merely annoying earlier on this afternoon, so I was able to do a bit more tidying up round the garden ready for the cold season.

I’d left the sweet peas last few rounds of flowers to set seed, and I needed the large tubs they were in, so it was time to collect the seeds and dry them out ready for the spring. Many people recommend planting sweet peas about now and then giving them a prune in February to give them a good start and encourage many stems. I’ve never had any success doing that, so I’m going to sow them in 5″ pots in about March time and hope they’ll establish themselves ready to plant out again in late spring. 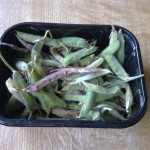 I also took the opportunity to rescue my specimem pelargoniums for the winter, one has done substantially better than the other two, not sure if that’s because it was in a wider pot or whether it was just a better plant. I’m always surprised by the volume of dead material you comb out of a herbacious plant when preparing to overwinter it indoors. I tend to take all the flower stems off and prune back the longer, more spindly stems so encourage the plant to spend its energy on new growth and building up energy in the roots ready for the spring. 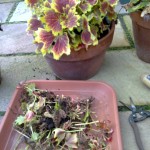 Tidying up a geranium

I recently took advantage of a few special offers that Thompson & Morgan advertise to Gardener’s World Magazine readers. Turns out they keep an online catalogue of them all, so you don’t have to place your order in the correct month. I’m sure things like the 100 free Spring Flowering Bulbs and 100 free Alliums are more than effective as a loss leader given the good selection of other plants advertised in that page. In a way, I’m quite happy to just order from that subset of their full range, way too much choice otherwise. Anyway, they will hopefully provide a good mixed background to the specimen tulips bulbs I’ve got to plant in the tubs I’ve just freed up.

http://www.thompson-morgan.com/gwm is where you want to be.

Otherwise things are a bit same old same old. A lot of my friends are off Doing Interesting Things at the moment, be it travelling the world, taking contracts in Australia or New Zealand, being couragous enough to quit their current job without having a replacement signed up first or doing their part to continue the species.

I guess this introspection was brought home by renewing my passport ready for some gratuitious trips away in the new year. Has it really been 10 years since I stopped by Goodricke College’s photo machine about 2 months after I decided to start growing my hair long (yes, I’ve been stuck with that photo for 10 years..)? I’d love to say I’ve come a long way in that time, but in many respects I’m feeling a bit like Peter Pan and refusing to grow up. Given a lack of other demands upon my time, I still tend towards consuming narration (one reason my bookshelves are bursting at the seams with crap scifi and fantasy fiction) and take part in adventures that others have already created.

Problem is, I still very much enjoy the life I’ve built and feel very little compulsion to change things for the worse, just for change’s sake. I get to look out of the window at the afternoon sun highlighting the Wolds in the distance. I’ve worked in the same office since I graduated and I still get the opportunity to make a difference every day to a cause I consider worthwhile. I’ve been able to pick up new skills that take my fancy, like cooking, photography, gardening and even dabbling in Tai Chi (scarily, I’ve signed up for a class in a different style of that at work, should be ‘interesting’). Oh, and I get to share it with a certain somebody I think I’ve persuaded that it’s better to live with me than not 🙂

Growing up doesn’t seem all it’s cracked up to be, once I’ve finished and published this ramble, I might head back to the internet in search of more data to answer my current question. What’s the difference between investing in a Stocks’n’Shares ISA over the next 30 years and a Government approved Stakeholder pension? Does the tax relief on contributions but also the administration fees outweigh the lack of flexibility with what you can do with the capital come retirement age?

Gah! It’s almost tedious enough to try an experiment in the kitchen, can you leaven an apple cake using yeast because the nearest shop to home’s sold out of self-raising flour?

One thought on “Garden tidying and a moment of Dear Diary”