After a morning spent failing to shop, with plenty of queues and none of the things I wanted to buy, I felt in need of some gratuitous sweetening up. I’ve been meaning to try making fudge since I tried some of Jo C’s homemade fudge a year or five ago. A quick bit of research showed that it’s remarkably easy to make, and as it turns out, remarkably easy to break too.

Wikipedia’s write up of fudge is a pretty good summary of the chemistry involved, but what follows is my take on how simple you can get away with. Equal parts of thick cream and sugar, boiled up to 116 degrees C and left to cool. Add flavourings to taste. If you use a good flavoursome sugar, you probably won’t need to add anything else, I split mine into two so I could try Rum’n’Raisin and traditional Vanilla. 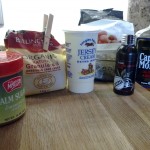 Mix the cream and sugar in a pan and very gently heat to a simmer, stir until the sugar is all dissolved. The best tip I found for telling that is when you no longer feel the sugar crystals against the bottom of the pan. 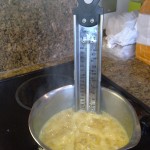 Fudge in the pan, with the sugar thermometer

Take to a rolling boil, careful not to boil it over the pan until sufficient water has evaporated to let the sugar heat to 116C. Mine took about 20 minutes on a medium heat until my sugar thermometer read ‘Soft Ball’ 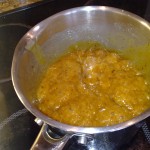 Fudge, just off the boil

Whilst that’s going on, line a shallow tray with greaseproof paper to cool and shape your fudge. I tried clingfilm as well. Greaseproof worked perfectly, a double thickness of clingfilm didn’t.

It’s at this point you should have a reasonably thick, golden caramel coloured gloopy mix which is still fluid enough to pour. 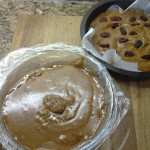 Fudge cooling in the trays

Mix in your flavourings and pour into your tray to set, mine was set in 30 minutes at room temperature.

To help resist the temptation to eat it too soon, I got a couple of tablespoons worth from scraping the pan to, err, check quality. Yes, that’s it.

Next time around I’m definitely doing a double quantity, to try to get a much thicker result and also because it’s dead tasty (I suspect my dentist would disagree).

I’ll also be more organised and soak the fruit in the rum overnight, that would make a huge difference to the final texture and experience. I used generic rum to get the recognisable taste out of it, I did briefly consider using the Renegade Rum I’ve got, but I suspect Jim McEwan would drive down from Islay just to slap me.

It shouldn’t be too hard to make a roll effect either. It would need to be cooled on a sheet of greaseproof to about 1cm thickness but only left for about 5 minutes, enough to hold its shape but not to properly set. Then melt a couple of bars worth of chocolate, spread the choc on the fudge and then roll on a bamboo mat. Serve sliced.

Or cheat and mix in a deep tray and use a pair of chopsticks to very gently mix the two into a marble pattern.