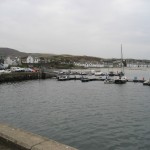 I’m writing these words from the Quayside at Port Ellen, queuing up for the ferry home with the smell of salt on the breeze and seagulls cawwing over the harbour.

This week’s Academy was a far cry from the combination of chemistry lessons and warehouse operations that I was expecting. Each of the people we met had a seemingly limitless collection of stories of their experience of the island, life on it and the history of the distilling industry. It became clear that this was an exceptionally important part of the end product, so much so that a quarter of Jim’s 8 ‘Key Factors influencing the Flavour of Whisky’ are Location and People.

My fellow students were a great bunch both individually and as a group, I’m certain it wouldn’t have been anything like as fun otherwise. They were all rock solid whisky followers and I had much to learn from them, as well as more than a few laughs. I perhaps spent a bit too much time with my face in a notebook and a laptop writing up my notes from the action packed days, but I didn’t get to know them as much as I’d have liked. Perhaps I’ll just have to use the whisky ships as a feeble excuse to return to Switzerland.

Duncan and Jim both said visitors take a piece of Islay home with them. It’s not just the scenery or the lack of hurrying or even totally transforming the style of management of a reasonably successful business. But I will miss the belief in what they’re doing and the general joie de vivre, even down to the smiling and waving at other drivers as they go by.

I had the chance to briefly converse with a novelist from Strasbourg who had just arrived at Bruichladdich to research exactly this, all their stories were written with the goal of encouraging readers to enjoy life, wherever it may lead. I like the sound of that, it will be interesting to see if there’s an essence of Islay that can be distilled into words.

For now, it’s back to reality and the sail and 300 mile drive home again. I wonder if the car alarm symphony will play a different tune on the return leg and how far I can get up the Mull of Kintyre before passers by replace waving back with a funny look.

When I was saying my farewells, everybody said I’d be back, sooner or later. Y’know, I think they’re right.

It hardly seems real that my trip to Islay was a week ago. Apart from the fun of recounting my experiences and a few stories to my malt loving friends, it’s been quite difficult to hang onto the feelings of last week. It’s all too easy to descend back into the busy busy busy work and the mindless consumption of life, whether it be watching dvds (Battlestar Galatica and the simply fantastic Dr. Horrible’s Sing-Along Blog
, playing computer games, cooking something quick rather than making it from scratch or just kicking back and guzzling novels at a rate of knots.

I mentioned that the sense of smell was based hugely on memories of scenes. Well, just the smell of a dram of Black Bottle was enough to sent me slamming straight back into the Still Room at Bruichladdich. If the dram smelled of a 1 on a scale of 10, then the still room smelt of 11, but it was still enough to bring back the association. And of course, I’ve got a few props (well, ok, bottles), more than a few photographs and a lot of interest in my holiday musings. Thanks all!

September is a fantastic month to spend outdoors, the sun is still bright, the skies clear and the wind slightly cooling. That, the garden that needs a spot of tidying and propagating from and the myriad recipes I’ve got that need writing up should help me resist sloth’s siren song for a while longer.