Today started for me in Jim’s ‘lab’ for want of a better phrase. It’s more an office with glass fronted cupboards containing samples of whiskys from all over time and space, presumably it’s his Reference Collection. It was serving as the venue for my ‘olfactory test’, which I was a little concerned about because I didn’t think my sense of smell was particularly sensitive. Turns out I was right. 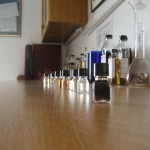 The test was Jean Lenoir’s Le Nez du Vin, a collection of 54 scents with names, labels and descriptions. The idea was simply to blind smell and indentify them as best you can. Smell is a very associative sense, it takes skill and practice to quickly go from smell to noun, but for the purposes of this test, a description of a scene will do. Up until now, I thought the only gap in my smell was garlic, unless it’s so strong the neighbour’s can smell it, neither can I. Turns out there’s a lot more I can’t smell. The details aren’t hugely gripping, but I’m starting to develop a theory that suggests there are a given number of smell receptors that combine in a gamut. And one of mine is turned down to 1.

Moving right along. Duncan took us on the company bus to see the new barley drying facility that was built up the road last month. Took about 5 weeks all in all to put the warehouses up, lay the foundations and installing the weighbridge, drying grid and heater. It takes 30 tons per load and takes 1 hour to dry 1% humidity. We also met a few different varieties of barley, most notably ‘Bear Barley’ which is a very old variety of 4 row barley. It’s harder to grow so commands a premium, gives a low yield of spirit but by heck does it make nice whisky. Sounds typically Bruichladdich to me. 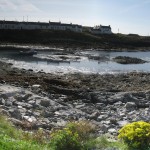 We were then treated to a fantastic tour round the western part of the island on the way back to the distillery, taking in Portnahaven and Port Wemyss, two villages very close together but so distinct they’ve got seperate doors to enter their church. The weather was so good we tripped up to the old wartime signalling station at Kilcharion, which used to be the final point of contact for convoys heading across the Atlantic. 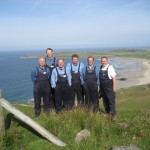 The crew and the Atlantic

After lunch, James took us out to a nearby Peat Moss to teach us how to cut peats. You use a simple and frequently homemade tool, like a thin spade with a single edge to it, as modelled here: 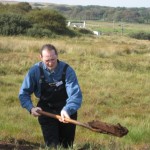 It’s all about efficiency of movement, if you’re cutting peats all day every day, you want to get even the slightest twists and turns ironed out. It’s a team effort, one cuts and another turns and stacks. A normal row of 4 peats wide by 2 deep, over a length of about 100m takes about a week to cut and should last a croft all year. It only works in spring though, it takes a couple of months to dry out sufficiently to burn.

Historically, peat cutters were paid by the perch, an area of drying peats about 5 1/2 yards square. The majority of peat harvested nowadays is simply to provide smoke for the malting kilns, so there’s hugely less taken from the ground, so the environment can breathe a sigh of relief there. It’s a dying art, most of the people in the distillery learnt when they were young as an odd job or still cut for their home use. 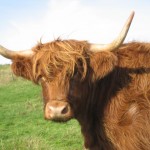 Wot you lookin' at?

The remainder of the afternoon featured my interview with Jim and our examination, to see if we’d been paying any sort of attention during our time here. Unexpectedly, I was introduced to Mark Reynier, who is every bit as passionate and articulate in person as he is on the Laddie Blog. He also has a ridiculously big Apple LCD.

I could tell you about the final test, but then I’d have to kill you. Details are everything and it turns out to help not to have lost the instruction booklet with all the history on the first night. I suspect it’s going to be years until I forget 17245 and 0826 29th May 2001.

The evening’s presentation and 2 minutes of fame speeches were passionate and individual, made even more remarkable because they weren’t in most of our first languages. It was clear that I was a complete whisky novice compared to the rest of the crew I’ve spent the week with. Jim, who’d had all of a 10 minute interview to judge our characters, had something grand to say about each of us individually, an emotionally charged half hour.

Despite the huge amount of information I’ve been exposed to this week, I think I’ve learnt just enough about Single Malt Whisky to begin asking the correct questions.