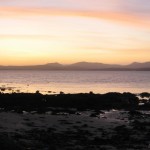 The morning shift in the still room starts at 6am, but we rocked up at about 10 to 7, give or take a slight detour to take photos of the pre-dawn glow over the Loch. On a cold morning, the still house is going to be a pretty comforting place to be, with the light spilling from the door, the sounds of the steam pumps and the smell, oh the smell! It’s such a nice place to be that they’ve installed a park bench at the end so that they can invite visitors to share a dram there of an evening. You’ll have to

I’m going to break with mere chronological order here to attempt to bring a bit of order to the force because we visited the mill, mashroom and stillroom in exactly the wrong order. There wasn’t all that much for us to actually do apart from trying to learn it all, so it’s not quite as good reading as yesterday.

They’ve got 6 grain hoppers on site, each of which store 25 tons of malted barley which is enough for 23 mashes. Malt is graded on supply with an expected yield, 310 litres per ton is not unreasonable. I won’t publish their current buying price for grain. 1 mash is 6.5t of grain, milled into the current ratios of about 20/65/15 of husks, middles and flour and mixed with 33000 litres of hot water at 65 degrees C from their CHP. 1 mash takes 8 hours to do properly using 4 washes (to make sure they extract maximum sugar from the grain) and they average two mashes per day. 1 mash is stored at 22 degrees C (with the exhaust being used to pre-heat the next charge, heat exchangers are very much ftw) in one of the 6 washbacks for a couple of days whilst fermentation from the two strains of yeast does its thing.

When fermentation is complete at about 7% abv, a washback is drained into a 30,000 litre charging tank in the stillroom which has got a tremendously complicated automatic laser display depth gauge. A wooden float attached to a piece of string attached to another piece of wood which hangs down along a scale calibrated in inches, with a scale of 500 litres per inch. 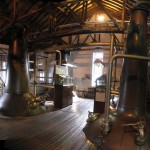 There was another piece of wood on string scale in the mash room, although that was 41 gallons per inch. when the tax man is involved, the calibration suddenly decimalises, but otherwise expect adjacent temperature gauges to be in C and F.

From here, ~13,000 litre charges are pumped into one of the two 17,245 litres wash stills which produce the low wines at about 22% abv. These are temporarily stored in the low wines and feints tank until needed to feed the two 12,742 wine stills, which are the fun part and produce the final spirit at an average of 68% abv.

The distillation occurs in three phases, foreshots, middle cut and feints. The middle cut is the bit that’s the final whisky, the rest is put back into the low wines and feints tank ready for recycling, it’s too valuable to bin. The transition between the phases is one of the key decisions for the stillman and it’s a mixture of art and science to notice.

Buichladdich are more concerned with quality than quantity, so they run the foreshots for 40 minutes and aim to cut over to the middle cut at about 77% abv. The pure spirit then runs for 2.5 to 3 hours until it fairly quickly drops down to 61% where the rest is fed back into the feints tank until the still is producing 100% water. The average abv of pure spirit aims for the filling cask strength of 68.5%.

The foreshots are run to both get rid of some of the methanol and also to clear out the condensers from the last run whereas the feints are where the relative volume of alcohol dwindles such that the balance between it, the methanol and the ‘oils’ tips too strongly and the result is, frankly, flippin horrid.

The whole process would make an ISO9001 auditor weep, in order to comply with legislation the entire process has to reconcile to within 2% (recently relaxed from 1%). This is done purely by manually noting down times, abvs and volumes on log books and them being added up at the end of each week. It’s pretty obvious when something goes wrong, even to the tune of 10 litres per ton of grain. That means dismantling the entire distillery to find it, so is a costly and tedious exercise, although it helps that the managers also built the plant.

We learnt how to take measurements and samples at each stage of the process, which involved unlocking the spirit safe. Since the tax reforms of the early 1980s each distillery no longer had its very own tax man, unlocking the access to the pure spirit circuit is just a matter of paperwork.

Methanol has a very distinctive smell of acetone so it’s easy enough to spot. The middle cut contains just about everything that’s present in the final whisky, the maturation smooths out the rough edges and adds colour and a bit of flavour from the wood. The only way I can think of describing it is a Total Taste Sensation. The first hit just totally overloads your tongue so you need to treat it with more than a little respect unless you don’t mind having your tongue anesthetised for the rest of the morning. The second hit, on the other hand, is a fantastic array of fruity flavours.

The feints are very distinctive, the first smell is strongly of soap, with an undertone of general mustiness, think old trainers. 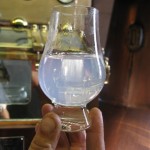 Foreshots. When blue, do not drink.

Apart from the hydrometer, the other way to check the progress is to examine how the oils interact with water by diluting the sample with an equal part of water. If it turns blue, that’s the methanol. If it doesn’t, then you need to check how it seperates, and this is where 35 years experience helps. If you agitate it, the bubbles in pure spirit settle out evenly and quickly, whereas feints don’t.

Right, enough theory for one week.

Driving a Still struck me as being very similar to running Terry Pratchett’s hall of Procrastinators, they generally get on with the process all by themselves, but with 35 years experience you can get them to do things that don’t seem entirely possible with just, say, 25 years experience. One example is having the two wine stills running 1 hour apart and yet finishing together. There’s definately a lot of feeling what level the process is running at by kicking the still and listening to the steam valves. A good stillman can tell by looking at the cloudyness of the spirit whether it’s pure spirit or feints.

A quick detour into how maturation works.

In cask strength good spirit you’ve got 68% alcohol, x% water and, importantly, y% ‘oils’. You can put a variety of names to the ‘oils’ part but the idea is that this is all the room that the distiller has to work in to impart flavours. When the spirit is in contact with the wooden cask in the summer time, the ambient temperature increases and the cask dries out slightly, causing it to contract and absorb some of the oils from the spirit. In the winter, the cask rehydrates and relaxes the oils back into the spirit again, taking essences of colour and flavour from the wood with it.

It’s generally recognised that about 19-20 years is the longest you can sensibly leave whisky in contact with a given cask before balance is reached and the whisky starts to leach back into the wood. The exception to this is when the wood has already been treated with something like fortified wine, where you wind up with that essence back in the whisky in short order, 5 to 6 months is plenty for sherry. (Allegedly dropping 1 shot of fine sherry into a bottle of Bells and leaving it for a week isn’t entirely horrible. Nothing was said about what the sherry thought about the process.)

There’s plenty of expertise for this part of the process, indeed it’s entirely possible to make a fantastic whisky out of a broken one if you know what you’re doing. Most single malts I can think of are marketed based upon an age statement. I’m now convinced this is absolutely misleading. It’s not the age of it that matters, it’s what was done to it, in what, when, for how long and which part of which warehouse it was done in. I’ve experienced some 7 year old spirits that blow away some 21 year old stock. Likewise, I’ve met a 33 year old that’s been lovingly maintained and was stunning. Unfortunately not much of this will be bottled because it’s just not available in any quantity, which makes it rather tricky to share the experience.

We finished up the day with a quick tour of the Port Charlotte site, where the majority of the peated spirits are warehoused. The smell greeting you when you opened the door was fantastic, although you should probably like peat. Duncan regaled us with tales of the island, tales of other students, tales of American visitors, tales of his time travelling the world as a salesmen and tales about tales. If you so much as suggest that you could listen to a tale, that’s it for as much time as you’ve got. It’s clear that the man adores what he’s helped build and is plenty happy to share his enthusisasm.

I think the academy students are starting to tire a little, I’m the last one still up at quarter past 9, although that might just be the huge dinners weighing down on our souls rather than the lovely fresh sea air.

Despite having lost both my instructions and half my notes, I’ve probably picked up enough over the past two days to make an attempt at making whisky on a GCSE Chemistry scale. But I can’t imagine for a second it would be worth the effort.

One thought on “Bruichladdich Academy – Grain to spirit”