I’ve been paired off with another David, this one’s from Huddersfield, and we got a positively leisurely start in the warehouse at half 8. 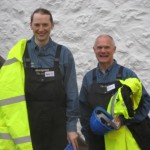 PPE'd up and ready to rumble

Our other fellow students, coincidentally all from Zurich, had a somewhat ruder start, two had to report to the still house at 0550! Breakfast was varied and substantial but the fried breakfast could take a hike, they made proper porridge, with water and nowt else. Can’t ask for more. Actually, that’s a lie, I had two helpings. Ostensibly to help Duncan’s (the Distillery Manager, Duncan McGillivray) bottom line because sausages are expensive to import from the mainland 🙂

The day was overcast, grey and threatening light drizzle. We could be anywhere in the United Kingdom 🙂 The midges also made their presence felt for the first time, but the rain soon saw them off.

We were greeted genially by the usual warehouse crew. Our first job was to help rinse out some newly arrived French “Petrus” Wine casks, they’ve still got some lumps of sulphur kicking about inside to help preserve the cask and the wine. We did this with liberal amounts of hot water straight from the distillery’s combined heat and power plant. Their CHP is about 3 years old and will finish paying for itself this year, apparently it saves £31k a year. I suppose it helps that the pier for landing fuel oil on Islay is opposite Bruichladdich’s distillery.

It was also a gentle introduction to rolling casks. The first one was a bit of a surprise, they are quite carefully balanced on their middles so don’t need much persuasion to change direction. It took no time at all to get the hang of driving empties around the place. 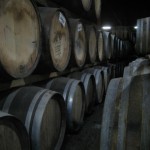 Time for a quick tangent about the warehouses themselves. There are over 35,000 casks maturing at any given time in the 4 warehouses at Bruichladdich and another 2 at Port Charlotte, a mile up the road. These are split evenly between modern racking and traditional dunnages.

Dunnages might be cheaper and more compact to put up, but they are a right pain for the warehouse staff because if one individual owner wants access to their barrel, which happens to be on the bottom layer, they’ve got to move over sixty casks to extract the one they want.

I still can’t name all the different barrels, but we’ve met casks, barrels, hogsheads, butts and puncheons that typically weighed either 250kg or 500kg. Regardless, losing fingers is the biggest risk in that place, if a barrel gets away from its roller, the reaction is most definately to gtfo rather than try to rescue it.

The smaller 230 litre casks weighed about 30kg so were fine to pick up and move around if necessary, it’s the big 50kg American bourbon hogsheads that you needed to steer clear around. Casks can take a huge amount of punishment, they’ve seen half tonne casks drop survive a sterotypical 2 metres onto concrete without leaking, so don’t think twice about climbing all over them.

There’s a fair acreage under roof, so it takes a while to do the annual tapping test to see how empty a cask has become. The rate of loss to the angel’s share is related to how empty the cask is, so defragmenting Whisky is very worthwhile.

Tangents aside and back to the day, for now. After rinsing the barrels out and rolling them up neatly with the bungs all pointing in the same way, it was time for a brew. Post brew, David was shipped off with a lorry load of full casks to swap over with some other full casks at one of the Port Charlotte warehouses. Inter warehouse transfers like that are ok because they’re all under the same Bond, it would only get tricky if it was moved to another company’s warehouse. I, on the other hand, got to meet the filling machinery under Grant’s watchful gaze. 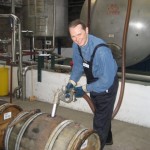 It’s basically a trio of 16,000 litre tanks, hooked up to a pump and a nossle by way of some steel plumbing and a mixer. The process is exactly the same as filling up a truck’s fuel tank, put the nossle in the barrel, lock the handle on high and wander off for about a minute and a bit. At 180 litres / minute it doesn’t take long to get the barrel to 90% full when the sensor automatically clicks it off, you have to do the remaining 20-30 litres yourself, which is where the spillage happens.

At that speed, there’s a fair amount of air coming back out the bung hole, you soon learn to keep your face away from that or you’d very soon stop being able to drive. Or walk. Or wield a hammer.

Stoppering a cask is straightforward enough, although my lack of hammer practice became swiftly obvious when the bung bounced straight out and across the warehouse. “Have you seen a hammer before?” “You’ve given me a left handed one!”. etc.

Trying to roll a full cask took a little practice after pushing the empty ones around. *push* *nothing happens* “Is the handbrake still on?” The trick was to always leave your gloves in contact with the barrel so you could brake steer it like a tank. 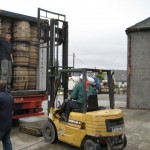 We’d just got as far as the third barrel when an artic arrived with a 40′ container full of bourbon hogsheads arrived from America. Unloading that was a job for the experts and what followed was a very well practiced operation. It would have to be, they get through about 180 casks each week. They eventually had two forklifts running in about 10 metres on a square, with two people inside the container rolling out the barrels, just in time for the next forklift to catch a cask on its forks which was then expertly rolled off again to form a pyramid. This went on for about 40 minutes or so and I could have filled a whole post with it. Or set it to music..

These new hogsheads were originally filled in May 2005, which suggests that first fill bourbon doesn’t take so long to mature as whisky, presumably because the oak is fresh. Or they were in a hurry. Bruichladdich had quite a variety of wine casks dotted about the place to finish in, Lafite, Madeira, Syrah, Chateau Le Pin, Petrus, Chateau Y Quem.

It was at this point my camera’s battery died, which was lucky because the afternoon after a late lunch was spent filling the remaining 56 casks with the 2003 Octomore whilst the professionals built them into a stack. This was definately fun.

We finished about 4ish, just in time for a leisure can of something cold wet and fizzy before Duncan dashed in saying, “quick, get in the van, Jim is in number 2 warehouse”. I don’t really have the words to describe the next half hour, but it was just extraordinary. Renegade Rum. Srsly. 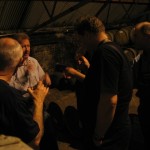 Jim McEwan is impressive in person, all being well we get to shadow him for an hour and a half tomorrow. There was an interesting point about how the brokerages worked, it’s all anonymous so when a given blender’s stocks of malts exceed projections it can be sold through the marketplace to independant bottlers without too much bother. It’s well known that Scottish distillers trade their stocks to make the blends work, but I didn’t realise that it’s all first spirit, all the blenders have to mature it in their own warehouses, so sales directors have a lot of estimating to do. In effect, it’s trading in futures.

Angel’s share in a cool country like the UK is impressive, the water generally isn’t lost, so something that was filled at 68.5% 33 years ago might only be 43.5% now, perfect for bottling.