After singularly failing to get a ticket for last week’s sellout Whisky Festival (so much for dashing back from Scotland in time for it), I went to yesterday’s Wine Fair. It’s the same format as the Whisky Festival, take one Fifteenth Century Guildhall, add eight to twelve tables of knowledgable wine suppliers who are keen for you to sample their wares, then take a tasting glass and do what comes naturally. 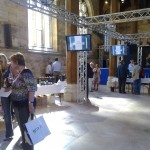 York Wine Fair in the Guildhall

In order to allow as many as possible to experience it, the wine fair was split up into two sessions. We went in the afternoon slot, which turned out to be a good idea because it was very quiet and meant you could monopolise a lot of the suppliers’ time. Apparently they sold about 40 tickets for the afternoon and 140 for the evening.

I don’t know a huge amount about wine so this was a chance to get some of the basics covered. I generally know what I like, but I don’t know much about the gamut of aromas and flavours that wine producers have to play with. I can’t help but compare it to whisky in terms of the processes and market realities, although that’s perhaps a bit abstract to try to convey in conversation (sorry to Martin from Joseph Perrier for rambling off on that tangent!).

The first table I visited turned out to be easily the best of the day. It was a chap named John who has recently set up Find Wine(.co.uk) with a couple of his friends, an online wine selector with a fairly unique twist to it. The idea is to stop buying wine based upon regional style assumptions and what the supermarkets have on special offer that week (month|quarter) and instead to think about it in terms of styles and price points.

In a way it’s similar to what I learnt last week about whisky marketing, most bottles are marketed as a Glen Lovely McTartan 10,12,18 year old which is great if you happen to know what that tastes like, but what if you don’t? Find Wine’s big idea is for them to buy a few dozen cases of what they think tasted pretty good at the time, matched into one of their categories and then sell it on. When that’s all gone, they’ll replace it with something else that’s good at the moment. The opportunities offered by this agile approach are huge, but it only works if you trust them to make these judgments and also for them to maintain the effort required to keep turning it over.

I spoke to John for about 10 minutes or so and I gave up trying to keep up with the barrage of information from him, it was very clear that he knew exactly what he’s talking about in plenty of detail and his tasting notes on the samples of wine he had seemed pretty accurate to my insensitive palette. One of the stories involved which grapes were generally grown on one bank of a river somewhere and which were grown on another! I’m sure that a professional knowledge of terriors should encompass that much geography, but it was still fun. Oh and they said they liked whisky too so might be trying it again with that, which sounded interesting.

The majority of the other suppliers had a theme, be it geographical or otherwise, one was Babich from New Zealand, another was representing Argentina, another was representing the Joseph Perrier Champagne house, and Sainsbury had a representative too to remind us of reality. Interestingly, the ones that weren’t involved in direct sales all had order forms from one of the local wine merchants that set up shop relatively recently, Field and Fawcett, so it wasn’t all ‘this is what you could have won’.

I got to spend a bit of time with the chap from Champagne, learning a bit about the different wines from them. I knew they were all blends, but hadn’t twigged that a lot of the biggest flavours came from red grapes, they just didn’t take the colours and tannins from the skins. Blanc de Blancs means it’s 100% chardonnay. Rose is simply that, but with a longer tail and a pink colour. For obvious reasons he wouldn’t tell me the blend they use in their Vintage bottlings, but a 75/25 mix of Pinot Noir and Chardonnay would be a good place to start. Only about 5% of a given year’s harvest reaches sufficient quality to stand up to the Vintage branding (he said 10% every second year), but commercial reality dictates that you follow your sales with supply which is their NV Yellow Label, so Vintage Champagne keeps its exclusivity. Like whisky, in order to keep to a house style with a variable input, there’s an awful lot of blending going on behind the scenes, between grapes, vinyards and between years. That’s another reason why the volume doesn’t have a single year on the label, because it isn’t from a single year’s harvest. That’s typically what ‘Reserve’ means on a label by the way.

A few of the wines that got asterisks next to them in my notes (apparently taking notes is remarkably uncommon. Is my memory that bad? or am I in the minority of trying to get some real data rather than just trying to drink more than £15’s worth of wine? bloody engineers, you can’t take them anywhere..). I wasn’t fast enough to get round the reds, so if you like white here we go:

Babich’s Sauvignon Blanc. It had an unusual and great smell of tropical fruit, lots of pineapple and mango with hints of the greener smells you get from S-B’s normally. The taste was what you’d expect from a classic S-B, a hit of dry and crisp.

Babich’s Unoaked Chardonnay. I normally can’t abide a taste of Chardonnay (even though it’s mostly what champagne’s made from). Apparently it’s the oak-aging that I can’t stand, because this New Zealand bottling was just wonderful. About 10% of the blend was fermented in Oak, the rest in Steel, so there’s just enough there to give it a body without overpowering the sublety of the grapes. The nose was subtle and fresh and whilst the sample was overchilled, it tasted great. Very green, light and summery, ripening oats or barley I’m told.

Sainsbury had a White Zinfandel based Rose from California (which meant it’s most likely a blend of white and red rather than the usual short maceration from red process). I’m not a fan of Rose, but I had a chemist in tow who is. It smelt slightly smokey, which I rather liked and had a light and sweet body to it.

There’s a Tarrango from Australian that had a gloriously fruity red who’s savoury body survives being lightly chilled and looks like a great replacement for the 2005 Bor Forras that I’ve been hoarding.

There were two wines from the Argentine Colchagua Valley that made it as far as my increasingly incomprehensible notes. A Vordello, the grape that’s normally used in Madiera but this time lightly presented as a fresh and summery wine that had a long acid finish. I also had a bit of a James May moment and discovered Viognier. This white has gone straight into my mental charts in the #2 slot, behind Alsatian Gewurtztraminer. It’s nose was light, apples and melons and pears, the flavour was crisp and dry like a white should be but the middle of its body is a remarkably strong and creamy hit of savoury. I reckon that wine would stand up to a curry. Lets find out.. 🙂

I finished off with a slightly out of place 1993 Caol Ila that had been finished in Moscatel casks. It wasn’t jaw droppingly good but I’d still give it 8/10 on the Eddie Scale and wasn’t over priced at £35.

Seems that wine distribution and whisky often go hand in hand. Who knew? 🙂