A friend at work reminded me that Blackberries have just come into seasonand she was in the process of making some Blackberry and Apple dried fruit strip things. I’ve tried this process once a few years ago and the experiment met with a sticky end. And buying a replacement baking tray. A bit of googling around suggests that the common name for this is a Fruit Leather. You often see dried fruit bars being sold in health food shops for silly money, so as the saying goes, How Hard Can It Be? 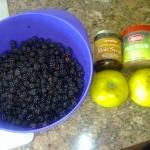 Debug the blackberries if you picked them fresh and coarsely chop the apples. Put them into a pan along with the sugar and syrup and slowly bring to the boil. 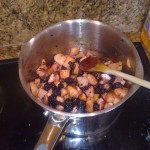 Stir it all together

Heat through until the apple starts to collapse, there should be plenty of water in the apples and berries if you’re patient enough to release.

and simmer it down

Blitz the mixture into a smooth puree with a mechanical chopper and then very slowly simmer it down until it’s lost over half its volume of water. It will most likely spit bubbles of fruit puree over the kitchen, so covering it in a water that will let the steam escape is recommended. 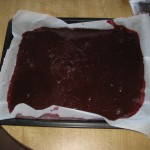 Pour it over a shallow tray

Take a baking sheet and line it with sturdy greaseproof paper or baking parchment (this is the bit I forgot the first time round) and spread the mixture thinly over the sheet. No more than 5mm thick.

Now the expensive part. You need to dry it out, and if you haven’t got a special food dehydrating machine then you’ll need to use your oven. 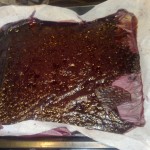 After a day drying

It took me about 24 hours at about 50 degrees C in my fan oven to get it to a state where it was sufficiently dry. If it’s still sticky and you can stir it with your finger, it’s not sufficiently dry. You can tell it’s sufficiently dry when you can smoothly pull it away from the backing paper. You must not heat it too much, slowly does it. You are not after jam, you do not want the sugars to caramelise (and you don’t want to be scraping Burnt off your oven for the rest of the weekend). 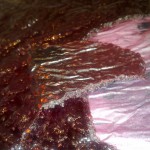 Cut it into strips and store it in an airtight container until you’ve eaten it all. Which if it’s like mine will probably be about Thursday.

If you want to go for the gold star, then I urge you to sieve the mixture before spreading it over the tray. It’s not that picking Blackberry seeds out of your teeth all week isn’t fun, but doing without the seeds makes the mixture more cohesive when it’s thin and it’s a better finished product.

This was largely an idea for how to preserve ingredients that are currently in season, but I think Raspberries or Blackcurrants would go well, although you’d want a more refined sugar and probably a lemon’s worth of juice. Apricot and Mango would be nice too, but the Mango would take yonks to break down.

I wanted to see if I could a touch of the exotic by using palm sugar instead of castor or preserving sugar, but I couldn’t really detect it in the final product. Using a few generous tablespoons of honey would also have worked and seems a bit more authentic somehow because it’s hugely less refined and manufactured and not generally shipped all over the world. 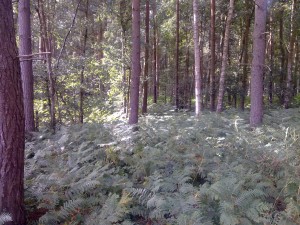 Sunbeam over the blackberries

One thought on “Blackberry and Apple Fruit Leather”