What a first day to a holiday. This is boding well, although I should have started making voice notes as the day and the miles went by.

Today marks the start of what I hope will be a once in a lifetime trip through Western Scotland to a 4 day visit with the Bruichladdich Academy. Whisky’s been an interest for a while and the opportunity arose to spend the best part of a week learning from the professionals. It’ll be hard work, but I’m confident it’s gonig to be fantastic.

Getting to Islay from York requires careful coordination with Calmac’s ferry service, so what better excuse for a overnight stay in the Argyle Forest on the way.

Travelling has always been fun and optimistic, whether it’s the view down the train tracks to the world beyond or turning onto the motorway and putting your foot down, there’s a very real sense of adventure.

Even travelling over the pennines on the A66 was fun, apart from all the caravans that is, I think Brainiac has the right idea. Cresting the hills at the half way point along the road where the Lakeland fells first come into view in the distance was a sight promising good things to come, there was a sunbeam over them rather than a thunderstorm.

The motorways up past Motherwell, through Glasgow and out the other side past Dunbarton were a serious shock. This was 3 o’clock of a Sunday afternoon, surely about as offpeak as you can get? Apparently not, it took me a little under 2 hours to do the 15ish miles, and I managed to not get lost once, although there was a close thing when I turned off the M8 onto the A82 and nearly wound up in a car park.

The change from City to National Park comes on very abruptly, one moment it’s yet another roundabout, the next there’s a view over Loch Lomond to the right. 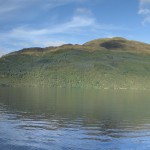 I haven’t been to this part of Scotland for a very long time, and seeing it in mid september suggests that it needs revisiting in some detail. I’ve got a faint memory of picking up quartz pebbles on the shores of Loch Lomond from when I was a teenager, and slightly more recently, I had a fantastic weekend at Ardgarten with the University Walking Club. 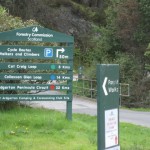 As I remarked to one of the people working at the visitor centre at Luss, I don’t think I’ve seen the top of Ben Lomond before, it’s always been shrouded in cloud or rain. Not so this time, clear views all the way, with the late afternoon light just creeping over the western edge of the valley. It took a few attempts to find somewhere to park the car that didn’t have a tree or a picnic between the camera and the Loch, but I made it.

The actual panorama shot will have to wait until I’m nearer more bandwidth than my mobile phone provides.

I absolutely had to stop at the Foresty Commission car park at Ardgarten, although I didn’t go so far as to track down the Youth Hostel we stayed at, that place and more importantly, the smell was just enough to bring the memories crashing in. Certainly the Outdoor Society was one of the best things that happened to me at University, and that particular weekend trip more than some because one gentleman (T.H.H.) in our group, who hailed from Melton Mowbray, brewed up a pot of some substance called tea and invited me to partake. This was about 1am after driving up in a minibus and it was, of course, the best thing ever. The rest, as they say, isn’t quite so much history as a regular account from Fortnum’s tea department..

I wish this blog came with smell-o-vision, because the sense at the edge of the wood at Ardgarten was remarkable. It was a late afternoon on a day that hailed of a second summer, very clear skies and a slight chill to the breeze. The water coming down from Glen Croe was making its presence felt with both a good trickling sound and a humidity to the air that helped bring the smell of evening from the pine trees at the edge of the clearing. The wind wasn’t strong, just enough to add a sussurus to the water. If you could bottle that scene, you’d make millions. Interestingly, there was a ‘woodlands for sale’ sign just up the road..

It was only slightly coincidental that I chose this time to be hanging around the tops of lochs, the sunset across the still waters of Loch Long and Loch Goil was magnificent, if tricky to photograph on my pocket camera. I’m only starting to rue not getting an SLR and I have only barely started this trip.

My venue for tonight is the Lochgoilhead Hotel, not to be confused with the Drimsynie House Hotel a mile up the road, although they’re run by the same estate they cater to slightly different markets. Once I got to the bar past all the punters having a pint, the staff were very friendly and had me checked in two shakes of a biro. The single room was remarkably low priced, but is very well presented, good quality brew making kit, very new looking bed and a good ensuite. Oh, and this the view out of it. 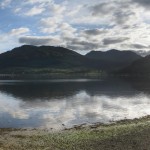 After a quick walk to stretch my legs after what turns out to be 7 hours travelling, it’s time to go see what Dinner’s like.

Tomorrow: kill a couple of hours on the way to the ferry terminal, then the real adventure begins.

PS. Yay, I got the word sussurus into a story at last!

PSPS. Turns out Dinner was a very well executed steak and chips, followed by a short dusk walk around the lake towards the leisure complex that pretty much dominates the area.

PSPSPS. Photos definately have to wait for tomorrow. Vodafone fails, so I’m blogging at 9600 baud.