It’s been a great few weeks in the garden, midsummer is the time of year that berrying shrubs (which is not to be confused with burying shrubs) crop and this year has seen a few firsts for me as well as a few reliable favourites. 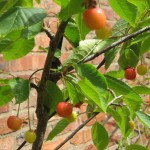 3 weeks ago, I spent a merry afternoon putting my hard earned boy scout knots to good use lashing together a fruit cage to put my cherry tree in. The tree is a graft of two varieties, I can’t remember their names, but one is about 3 weeks later than the other. Last year was the first year it was old enough to start fruiting and the birds got them before I did, so this year was going to be different. 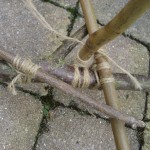 The cage was pretty simple, I used three 2 metre supports, three 1.5m crosspieces and three 2m diagonal braces, lots of garden twine and 4 metres of fruit netting from the local DIY shop. You do need one diagonal bracing (remember the triangles, always the triangles) per facing, otherwise it will fall over in the wind. If you can’t be bothered with that bit, then bury it in the ground a bit or pretend its a tent and deploy some guy ropes. 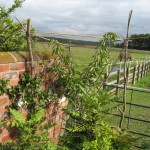 The cage only has to be up for 4 weeks of the year, but even so, the corners do have to cope with a fair bit of abuse so make sure you do a good tight job of your square lashings and remember a few frapping turns. The diagonal bracings are better done with a lashing with more give in it, it’s the angles that hold it together. 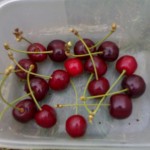 Keeping on a cherry theme, it turned out to be worth the effort putting the cage together because one week later, we had our first handful of home grown cherries. They were sweet and juicy and whilst they weren’t quite as big as professionally imported ones, the smug factor was great. The second variety should be ready for harvest sometime this week, if the sun puts in an appearance again. 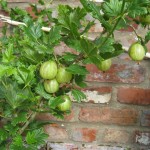 The gooseberries have been picked and put straight into the freezer. This year I wound up with a smaller number of really big dessert gooseberries, which I think I’ll do on purpose next year. General opinion holds that one bush gives a certain weight of crop each year, so it’s up to you whether you want to have lots of middling fruits or fewer big ones.

In the intervening three weeks, the blackcurrants have ripened and been harvested. That bush is probably 5 years old now and is giving me about a punnet a year, which should be plenty for an blackcurrant jelly to have with roast dinners or one or two cheesecakes. I couldn’t decide so froze them too. 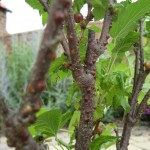 More scale insects than you could possibly imagine

Annoyingly, the blackcurrant bush has also produced a bumper crop of scale insect, I don’t think I’ve seen such an infestation before. Before I have to get my hands dirty and scrape all the buggers off, which would not be a fun way to spend an hour, I’m trying a two pronged approach to control it. The first was a few blasts from an extremely unorganic pesticide spray, which I’m sure won’t really work terribly well but the HSE won’t let you use proper stuff at home. I’m also leaving 10-20 berries on the plant and putting the plant out in the open, I’m hoping that will attract a few birds in who might think the scale insects would make a tasty course after nomming the rest of the berries.

The red currants are having a year off after the major pruning I administered last autumn, I had to cut out a lot of growth that would have fruited this year if the bush was going to survive in its pot. It’s grown back well, although the same can’t be said for the cuttings I struck in a pot. The cuttings that went straight into the ground have done exceedingly well, but in a pot? not so much. 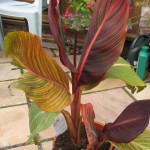 The Canna I bought earlier on this year has grown well, although it’s turned out to be vulnerable to the wind that howls through our garden and its leaves have been shredded somewhat. They’re still attractive and it’s fine to grow in a pot, but it needs more shelter than our garden gives. A sunny corner, perhaps?

The sweet peas have grown well up the supports and the first flower has opened. We’ll have to remember to keep on top of picking them because the instant that a sweet pea plant sets a seed, it will stop producing flowers and start dying back.

Some of the courgette plants have established better than others, unfortunately I guessed wrong which bed would do better than the other so things are getting more than a little cramped in places. Still, I’m confident I’ll get a major crop of ball courgettes this summer.

Spinach “tarpy” did very well to start with, its unusually shaped leaves were fun and it coped well with everything I cooked it in, however, it’s completely bolted after about 12 weeks, so definately needs to a succession sowing each month. I’ve run out of space for that, though.

Tomato F1 “Totem” are doing as well as in previous years, bushing out nicely and generally holding their form. Unlike maincrops, you don’t need to go to the effort of pinching out the sideshoots, training the main stem up a support and stopping it when its as high as you. Throw the seedlings in the ground, wait a bit and eventually you get a nice crop of sweet tomatoes. I hope.

The peas and beans were a write off, next year I’m growing dwarfing varieties of each and direct sowing, probably without major supports.

Finally, the beetroot is developing nicely and a few roots have started to swell up, fingers crossed for that too.