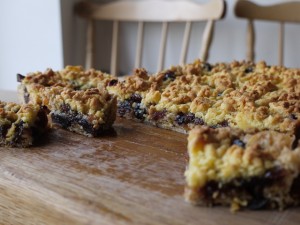 A couple of weeks ago, Holly Bell’s recipe for Christmas Flapjacks caught my eye. I normally can’t leave well alone and this is no exception, I’ve fiddled with Holly’s recipe a bit so that it’s slightly thicker and packs a bigger punch (also I had no rice crispies in stock), but I can take no credit for coming up with this one. I mean, grated marzipan? That’s just genious. There aren’t many words with this recipe because it really is very simple, but I think the results are very good indeed. It stores for at least two weeks in greaseproof paper in an airtight container.

It’s hard to describe just how tasty and sweet this is, but start with all the buttery goodness of flapjack, then layer it with sweet crispy marzipan, spicy mincemeat, crispy and chewy oats and cereal with pockets of juicy intense fruit. Decadent, and also quite handy for high energy food if you’re out Hill Walking.

Makes enough for about 2cm depth in a 19cmx26cm tray

Start the night before by:

Pre-heat the oven to 140C and do whatever you need to do to stop it sticking to your tray, I lined mine with a PTFE sheet.

In a large pan, melt the butter, sugar and syrup until it’s just starting to bubble. Now for the complicated part: tip all of the rest of the ingredients into the pan and stir until it’s all incorporated together. Gently spread a thin layer of mincemeat on top and then grate half a block of marzipan over the top of that.

Bake it in the oven for about 30 minutes until it’s cooked through and has a nice brown finish. Leave it to cool fully on a rack before you think about decanting it, otherwise it won’t hold together. 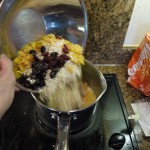 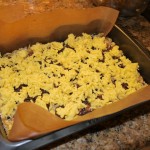 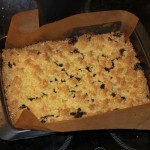 Mix it all up, put it into an oven tray and take out when golden brown