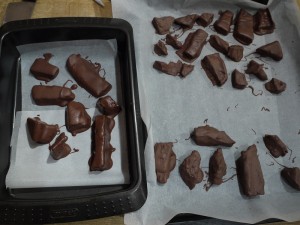 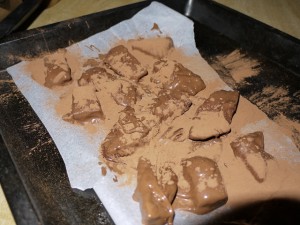 If you’ve read my last recipe, Caramel and Honeycomb Ice Cream, you’ll know that I’ve been playing around with melted sugar recently.

Just in time for Halloween and Bonfire Night, Cinder Toffee is surprisingly simple to make and great fun for all the family as it bubbles up all over the place and makes a sweet treat in next to no time. Generously enrobing it in chocolate takes it to the next level and makes, for me at least, a superior alternative to commercially available confectionary.It’s also a chance to play with chocolate crystallisation at different temperatures, a process known as tempering.

Cinder toffee is so simple that it must have been around for ages, and this article on the Guardian is a good bit of background reading on the science and magic of cinder toffee.

It’s worth noting at this point that this recipe involves molten sugar at over 130 degrees C. Getting toffee on your skin as you stir or pour it will result in tears at bedtime, so be careful.

This is a good opportunity for an aside about tempering chocolate, which again is easier with a temperature probe. The general idea is to make sure that the chocolate sets with as many of a certain type of crystals as possible, so that it has a shiny finish and a good snap to it. The demonstrations I’ve seen from people who work at the York chocolate factories advocate heating up the chocolate to 45C, then cooling it down to 27C by working it back and forth on a marble slab (the vibration encourages type 4 crystals to form), then gently warming it up to 32C and holding it there to use.

This year’s Great British Bake Off suggested a simpler method of heating the chocolate to 45C, then cooling it to 32C where it’s held whilst you work with it. I tried this approach and didn’t get on as well as when I did it by eye, which was to warm it up past 40C (so that it was warmer than my body temperature) then let it cool until it was just viscous enough for a ribbon to hold its shape for a couple of seconds on the surface of the chocolate when I dribbled it from a spoon.

Whichever method you use, it’s easier to get a nice, thick coating on the toffee if the chocolate is cooler.

There are many methods of judging when the toffee has reached the desired temperature, the most reliable is to get a digital temperature probe. It’s not as accurate as a traditional thermometer, but it’s much quicker to take a measurement and requires less depth of liquid, so I think is easier to use. I put up with a bit of variation and did it by eye by looking at the colour changes. You can also test it very quickly by dropping a couple of small drops of molten sugar into a glass of water and seeing how it sets.

If you’re using a temperature probe, 130C gives you a slight chew to the finished product, 140C is a drier crunch. The hardness of the crunch is controlled by the amount of bicarbonate of soda, less soda means smaller bubbles so you get a denser toffee that’s harder to chomp through. Too much soda means it’s a bit crumbly and also tastes of bicarb.

1 tablespoon of good quality cocoa powder, to cover up the finish

Takes about 25 minutes, in two stages.

Start by preparing your tray to set the toffee in, it should not stick as long as your greaseproof paper is smooth. If you’d like to make neatly rectangular sweets, then you could get all Blue Peter make a series of folds in the greaseproof so that the tray is divided into a series of long, thin, channels, about 1.5cm apart. Once set, the toffee bars should break into squareish chunks. 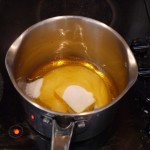 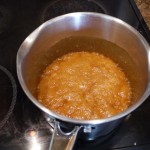 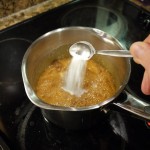 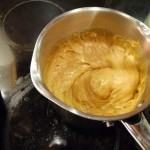 Honeycomb from start to finish

Making the toffee is straightforward, put the sugar, butter and syrup into a pan and give it the beans for 5 minutes. It should quickly melt and dissolve into a bubbly mixture that has a pale yellow colour.

Once the edges of the bubbles start to turn a darker shade of gold, and edge towards brown, then you’ve reached the target temperature and you can take it off the heat.

The liquid toffee is hot. Be careful.

Now sprinkle the bicarbonate of soda over the mixture and stir it thoroughly with a long handled spoon, it should start to froth up and treble in volume. Quickly pour it into the lined tray and leave it aside to cool completely and set. Be very careful not to knock the tray before the toffee has set, the molten mixture is fragile and vulnerable to being collapsed.

Once your toffee has set, and you’ve carefully broken it up into smaller pieces, it’s time to give it a lovely chocolate coating. Again, this will need a tray lined with greaseproof paper to set the chocolate on, the same tray and same paper will do as before. 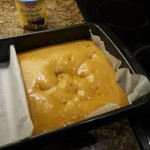 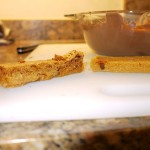 There’s no science to coating toffee in chocolate, simply get a fork and dip the toffee into the chocolate, then let the excess run back off and let it set on the greaseproof paper. I sprinkled a bit of cocoa powder through a tea strainer over the finished pieces to give them a bit more interest, it also covers up any odd surface blemishes. 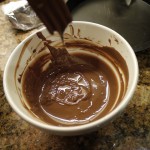