We met in Levisham village shortly before 11. Luckily I was there quite early because we weren’t the only sizable group setting off from there,so we had to share the parking along the side of the main street with a group of mountain bikers. I’d forgotten just how steep the valley is between Lockton and Levisham, definately a job for first gear and I wouldn’t have stood a chance if it was muddy or icy. I bet that village was quiet during the winter snows.

We left Levisham village at 11:00 am. Heading towards Lockton but cutting off before the steep hill down to head East past Levisham Mill farm to the A170. Our walk down the valley was enlivened by what might have been the local hunt passing by the other way, with one chap on a horse in a red coat and a pack of Hounds, being followed by a group of people in black coats. There was no hurry about them, as if they were just hacking out rather than going at full pace. We also heard the sounds from the local Shoot who we saw meeting up in the valley on our way in.

This is where we went slightly wrong because there is no footpath nor right of way through Mount Pleasant farm, it was changed over five years ago and all the diversion signs have long since gone, the correct route now is to pop up to Lockton and cross the A170 further south and take the footpath East along Green Dale, meeting back up with our the route in Stain Dale.

From there it was a straightforward trip North up to the Bridestones for some lunch, sheltering from the wind before heading East to the edge of the forest and following that path past Newgate foot all the way to Saltergate car park, taking in the views over Hazelhead Moor to Blakey Topping and RAF Fylingdales in the middle distance. 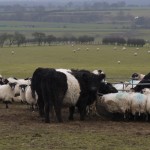 Up to the North End of Hole of Horcum along Old Wife’s Way before completing the High route circuit of the Hole of Horcum via Seavy Pond and Dundale Rigg back to Levisham and a round of coffees at the Horseshoe Inn, which had a couple of reasonable beers on tap as well. Amusingly, we got back at exactly the same time as the cyclists. Despite the amount of mud we’d accumulated on our boots from the first half of the circuit, they were definately wearing more of the countryside than we were.

If you’d prefer somewhere easier to park, then you could start the route at Saltergate and continue Clockwise, taking in a pub lunch in Levisham or possibly the Fox and Rabbit on the main road, before carrying on up to the Bridestones.

A good day out despite the chill wind, but we definately felt each of the 10 miles at the end of it. Next time, I might try calibrating Viewranger to display the distance walked in units of mince pies burned off.

You can get the full details from my Everytrail trip: