Dear internet, it has been many weeks since I last got around to putting face to keyboard which is entirely remiss of me and needs to be cured with a few more ‘this is what I had for dinner’ posts.

I’ve been surprised by the local supermarkets recently, I finally got around to stepping foot in York’s new Waitrose and thought I’d see what the fuss was about. By and large I wasn’t too impressed, but the shrink wrapped variety of ready to cook meat available was remarkable. A few things stood out in my memory: Veal mince, boned Pheasant leg portions and some misc bits and pieces that I wouldn’t put in my shopping basket let alone my mouth. Sainsburys weren’t being left behind though, with a racks of lamb ribs available for all of £7 and duck legs and properly aged, dry cured gammon joints at half price.

Although Tesco took the medal in the run up to New Year by having a display full of Beef foreribs at about £18! Sadly, such a steak would be wasted on just two of us, it’s far more fun to cook it to medium, let it rest for 5-10 minutes and carve it in the centre of the table straight onto everybody’s plate. Those that prefer their beef brown and crusty can have the outside half and those that prefer it pink and meltingly tender can have the inside half, careful carving puts both into the same slice. Leaving it on the bone adds to the theatre and gives you something to hold it by when carving.

I normally don’t make meat the star of the show in my cooking, but this is how I attempted to do justice to some of these great cuts.

Warm up a roasting pan in a moderate oven, about 180 C.

Score the skin and generously season the duck with a bit of sea salt and freshly ground black pepper, get some colour onto the skin in a hot pan and then pop it into the oven. The duck needs about an hour.

melt some butter and oil into the pan and toss the vegetables so they’re mostly coated and put into the oven.

Whilst the oven does its thing, take the stalks out of the kale and roughly slice it. Put it all into a large pan on the hob on a low heat, add a tablespoon of mustard seeds, a good knob of butter and a mug of stock or water. Put the lid on it so that it can steam and leave it alone. You might need to occasionally shake it, but try not to take the lid off or you lose the steam.

Pour yourself a glass of a nice rich Red wine and sit around for half an hour whilst everything cooks itself. 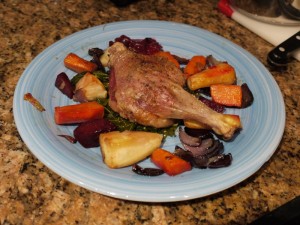 This was both an attack of opportunity and a ‘I’ve seen this on TV, how hard can it be?’ moment. It needs a pan that works on both the hob and in the oven and for me at least, required me to really trust the cooking times.

1 rack of lamb at room temperature
2 or 3 tablespoons of chopped herbs. Rosemary, Thyme, Mint and Sage go well with Lamb.
1 Parsnip
a hunk of celeriac
2 potatoes

If you like, trim down the lamb rack to remove most of the fat so it goes well with fast cooking. Take off the membrane too, whilst I found that made the lamb look very rough, I was aiming for tender more than I was pretty.

Using your fingers, rub a little oil over the lamb and liberally coat it in the chopped herbs.

Sear the lamb on both sides on the hob to start it cooking and get some colour into it, a minute or two per side is enough. Then put it into the oven to finish off.

I used Jamie’s cooking times of 25 minutes per pound and made sure I rested it for 5 minutes before carving. It comes out of the oven a little underdone, the resting time is important.

Then you’ve got the fun of carving down the bone into cutlets to serve with the vegetables and a good dollop of mint sauce. 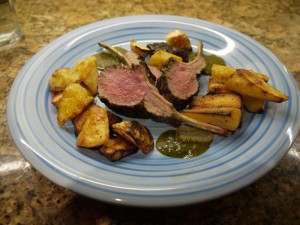