These pedometers from the GCC are utter rubbish, there’s no way I averaged paces that big over that terrain, or even when ministry of silly walking down a road. I’ll keep quoting them for comedy value, but the GCC website is going to get something closer to reality, 40cm paces on flat going down to 20 for up and down.

Anyway, after treating ourselves to a lie in after yesterday’s pain, we started off straight uphill, thankfully through the shade of forest. My uphill mode is slow and ploddy, so was soon overtaken by a few people doing the TMB backwards, including a british father and son team with whom we chatted for a bit.

It was further uphill than we remembered, stepping over rocks and tree roots wasn’t a patch on yesterday’s morning, tho perhaps more realistic of what’s to come. The sun shone very strong today, which led to many photographic pauses on the way up. We were treated to some good views down the hazy valleys to Verbier and Martigny, ignoring that 2hours on a post bus would see us to Grimentz and what’s this about spending 10days walking there?

We emerged from the climb at the gate overlooking the Alpage Bovine, which has come on a bit since we were last there. A gratuitous pause for a great light lunch of cheese and sausage meant we left the high point of 1975m about midday.The descent towards Champex was, err, challenging. Steep, rocky and / or rooty ground and the scorching sun meant we made slow progress. At least we didn’t have to go up it though like many TMBers, nor did we see how on earth we managed to get lost when we were last here.The final stretch through the valley was slightly uphill, but on good tracks or roads. It was hot enough for Paul to leave a boot print in the tar, but also too hot for me to be bothered to take a photo.

A fortuitous water trough in Champex en Haut meant restocking our platypusses with gorgeous cold fresh water for the final few km to Pension en Plein Air, which has also changed a bit. The rooms are still the same, but the bank of internet PCs are now a big flat telly, sofas and a pool table.

Arriving at 3 gave us plenty of time to wash stuff before the place fills up later on.Following on from rule #1, tomorrow’s route is moving from Cabane col de Mille to Verbier, neatly avoiding a heowge ascent that wasn’t looking so clever any more.

Also means we can visit shops for posting stuff and aquiring man-flu busting Swiss Pharmaceuticals and something to help with the interesting collection of blisters and bruises I’m accumulating. Apparently hiking boot insoles are s’posed to be replaced more frequently than never every 7 years, who knew? 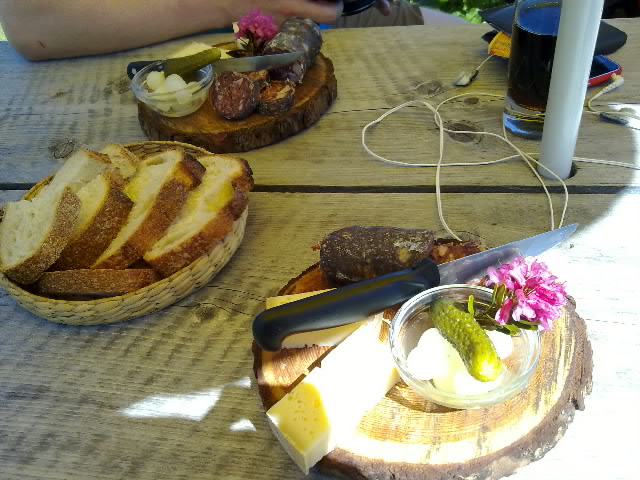 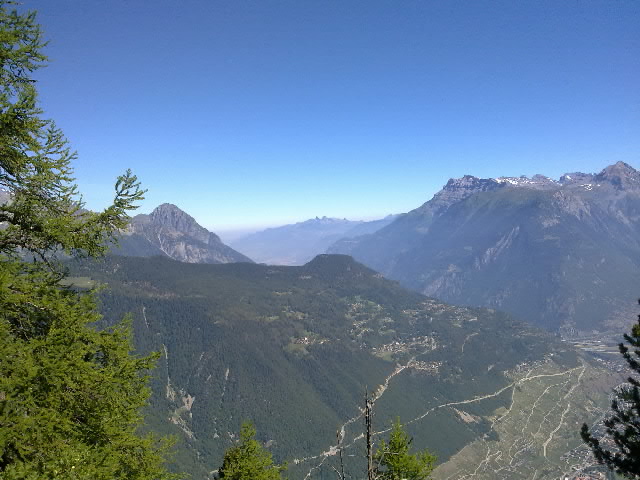 One thought on “Day 2. Col de la Forclaz to Champex”