Parathas are a unleavened Indian flat bread that are pan fried rather than baked. This recipe is a fun way of preparing a Paratha that’s similar in a number of ways to puff pastry and can be made nice and crispy on the outside and soft on the inside, perfect for scooping up a juicy curry. The base recipe is from the Hairy Bikers, but I’ve fiddled with it a bit to make it more interesting (and also because I just cannot leave well alone..). I might try adding a few toasted coriander or yellow mustard seeds next time instead of the cumin seeds. Don’t use ground cumin, it would just get lost in the bread.

Mix up the ingredients apart from the butter into a thick dough and knead it for a minute or so until it’s nice and smooth. Don’t add all the milk at once, add it slowly until you get a nice workable consistency. It should not be sticky.

Cover and put it in the fridge for half an hour to rest.

Break the dough up into four and roll it out thinly 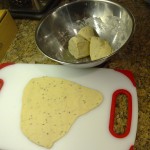 Now for the sticky part, brush a very thin layer of melted butter over the top of the dough and concertina it up so that it looks like a fan. Curl the edges of the fan round so that it forms a circle. 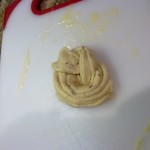 Folder and curled up

Roll it out again until it’s quite thin. Thinner than we managed. 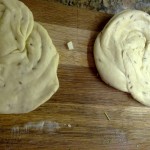 It should just about fill a frying pan, but still be thicker than a pancake. Give it about 1 to 1.5 minutes on each side until it’s golden and crispy. Don’t cook it so quickly that the outside burns and the inside’s still raw though. 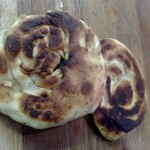