I went to go see the Hairy Bikers’ sell out stage show last week and very good it was too.

I wasn’t sure what to expect, but it was a good format that included bits of stand up style banter, audience interaction, a few video snippets of their more embarrasing years and, of course, two live cooking segments. As Dave Myers said, it didn’t have to make sense, they were just living the dream and people seemed to like watching them.

I don’t want to spoil it all, but there were a great many of little details that added to the overall comedy. I wondered how they’d make their entrance, on their bikes of course!

The show started at their beginning, they weaved a tale of baby photos into their careers and how they met, including Si’s tendancies to injure himself at every possible opportunity. Their tour has been going for a while now and they’re clearly very comfortable with the material, including some good comic timing that didn’t help my laughing muscles the next morning (

They often made mention of their appearances on Saturday Kitchen, one of the TV shows that my PVR watches on my behalf each week, and how doing that live was the most awake they’d ever been. So much so they pulled two unfortunate ‘volunteers’ out of the audience to sit on stage and be fed at their side table, very cringeworthy. 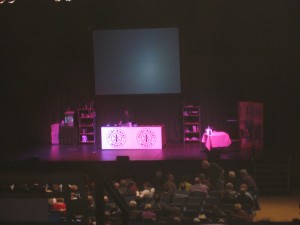 Judging by the number of recipes in the show’s programme, I suspect they rotated through the various meals as the mood took them. The programme was a mixed bag of glossy photos of the two messing about in front of the camera, a series of well written recipes and a few show notes. A recipe for Caldo Verde stood out as including “First take a small glass of port. Drink it, so that you’re in the right mood. Next take..”.

The first one they cooked was a prawn curry with coconut with Kerala Parathas. I’d not met this style of bread before and I made a note to try them at home when I next had a curry because they looked like a fun change to rice, naan or chapati.

As with many live cooking demonstrations, it’s hard to see the details of what they were doing from the back of the auditorium, so they wheeled out a cameraman. NEC Good Food Show quality it was not, with the camera man getting his cable tied up in the set and generally breaking things, but you could still just about follow it (give or take some Jamie Oliver style speed panning) and it added to the overall entertainment.

Dave Myers is probably the undisputed lord of the inappropriate simile, some better than we got in Red Dwarf. Funny stuff from the winner of celebrity mastermind, but I would question likening shavings of parmesan to a chiropadist’s floor..

If they haven’t got to your neck of the woods yet then I’d thoroughly recommend you tried to get tickets to go, tis a good night out. Especially with a G&T in the interval.