Some people might think that my car’s getting on a bit, it turns 10 in the new year, but I think it’s just getting going and should have at least another hundred thousand miles in it if I look after it.

Not having had alloy wheels on a car before, it didn’t occur to me that they would need some TLC every now and again.

The problem started about a year ago, when my Saab 9-5 was 8, with the two front wheels losing their air pressure more quickly than I’d expect. I found myself topping them back up from 20-odd psi every couple of weeks.

Earlier on this summer, it turns out ‘every couple of weeks or so’ wasn’t often enough and I’d done sufficient damage to my side walls to need a new set of tyres. Oops. It got as far as losing 5 psi a day before I got around to doing something about it. Even paying 50p a day for a few minutes at the nearest air hose wasn’t too expensive over a year, but the week’s holiday away from such things was enough to tip the balance.

The problem is that alloys rely on their coats of paint and lacquer to keep an airtight seal with the tyres and over time this gets attacked by the atmosphere and the occasional ambush by feral curbstones. 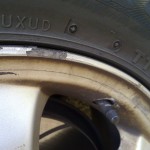 It was characterised by the paint on the spokes bubbling up as well as the more obvious gouges near the rims. 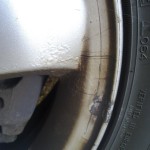 There are a number of services advertising on the interwebs that profess to refurbish wheels, but they all boil down to

As amusing as it would be to have hot pink or lime green wheels, local expertise (as well as not having to take days out of work) beats fancy websites so I turned down a national franchise and visited Ian Jemison Engineering, who just about all my team at work had heard of (except me, of course). He’s more well known for his years of experience driving rally cars, so I was confident I’d be in safe hands. In his words, “they were much more badly corroded inside than outside, and the outside was pretty poor”.

He doesn’t publish his prices, so I won’t either, but it cost much less than the set of tyres and it took a day to do all 4. The effect was very good, if I was bothered about the appearance I’d be very happy as they look brand new. As it is, that’s another 7-8 years of life out of my wheels, without following the advice of the dealers and spending over a thousand pounds on a new set or having to fit a compressor to the car Scrapheap Challenge style. 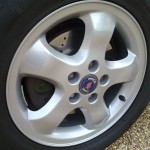 One thought on “Leaky Alloy Wheels”