After an incredibly dry September, Autumn has come crashing in with a vengance with some very British weather, alternating between gorgeous sunshine and totally ridiculous wind.

I harvested this year’s apple crop yesterday, another surprisingly generous harvest considering the small stature of the trees and their pots, I also gave up on the tomato vines putting any more growth into their fruit and picked it all green.

The tomato variety, F1 Totem, did well again this year, keeping to a bushy habit despite having plenty of space for its root to run around in. It wasn’t anything like as early to fruit as in previous years, but that’s almost certainly because of the amount of wind that whistles through our garden. I had two containers planted up with it, one longer trough that’s about twice as deep as a grow bag, and a shorter one that’s four times as deep. Despite the roots only going halfway down the compost in the deep trough, its plants did over twice as well as the shallower trough, so that’s worth remembering for next year.

I composted the rest of my courgette and squash vines after their leaves got covered with mildew and pretty much stopped working, although again I took a reasoanble final crop off them. The yellow ball variety, One Ball, did reasonably well, but was too late and didn’t get the chance to develop its dozen or so fruits per fine. The green ball variety, Eight Ball, did better and because its skin is pretty solid, I’m treating just like a squash so am hopeful they’ll keep for a couple of months.

I lifted a few pots of alpine strawberries that showed just how vigorously they can spread when given half a chance, to make room for a collection of red cabbage seedlings that should hopefully mean that next spring I’ll be mostly eating cabbage, as well as finding people with a home for some strawberries 🙂

If my chutney making is anything to go by, Autumn is early this year, the previous two years saw me harvesting green tomatoes the last weekend in October, not the first. The local squirrel has been busy stashing away acorns and nuts to make sure we get a few trees growing in odd places next year. 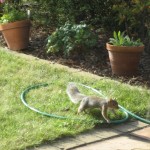 I’m having a go in a slightly different way this time around, in a bid to reduce the simmer time and therefore keep the colour less caramelised, I took out the seeds and soggy bits from the middles of the tomatoes. It was particularly fiddly, but seems to have done the job. I’m also mixing my own pickling spice which I first infused into the white wine vinegar over a slow heat for about half an hour: 1 teaspoon nepal peppercorns, 1 star anise, 1 teaspoon coriander seed, half a teaspoon cloves, 1 sprig rosemary and 4 small sticks of cinnamon. It’s simmering now and will be for another hour or two, I’ll let you know how it goes. 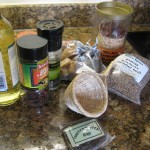 Spices to infuse in the vinegar for pickling

A quick consultation with the RHS Big Book of Everything suggests that I need to leave my Canna and Fushias well alone until the spring before trying to split or root some cuttings which means it’s time to see what spring flowering bulbs are left in the shops. If you give them time to get their roots spread before the frosts hit, they can flower a week or two earlier than if you put them in directly before the spring and stand a greater chance of growing on the rest of the year to flower again next spring.