Castle Howard puts on an annual summer concert which is an unashamed celebration of being properly British, and thanks to a good 2-for-1 deal with the local radio station, we were lucky enough to get to go this year. 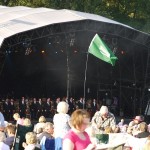 If you’ve not been to something similar before, then idea is to take a large national quality orchestra, put them on a big festival stage with a suitably exuberant conductor on the lawn outside a majestic stately home. Invite a couple of thousand excitable members of the public along with posh picnics and union flags, mix in a couple of large fireworks displays and you’ve got everything you need to get the party to go with a bang. And a bit of a whizz and pop too. 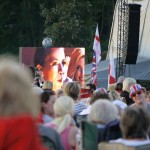 Amore on the big screen

Unlike when we went last time in 2007, people’s umbrellas were only needed to brolly-dance to the Sailors Hornpipe so it was a glorious evening for a picnic. However, like in 2007, we only arrived with half an hour before the start time on the tickets, so the place was already packed and the warmup act were half-way through their set. I’m a bit light on details as we couldn’t really see the big screens and I was more interested in eating sausage rolls than making notes, but I think it started with a Welsh mens choir (possibly Only Men Aloud) who kept things moving along before the main event. 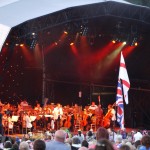 The music for the evening was courtesy of the English National Orchestra, a local tenor named John Hudson and star vocals from Amore. As in previous years, Jae Alexander did an excellent job of conducting and keeping the crowd entertained. The main set was split into two halves with the some more classical elements in the first half and popular favourites from the last night of the proms in the second half.

Also, flag poles seemed to be a bit higher tech this year, with people strapping flashing lights to the top of their Yorkshire and Union Flags. This made it a bit easier to try to navigate back to our spot in the crowd after buying another round of cups of tea from the food vans behind the VIP pens.

For us, however, the star of the evening was Flt Lt Charlie Brown who Displayed a Spitfire over the cheering crowds whilst the orchestra played along, including the theme from the Dambusters. Not a dry eye in the house and a good opportunity for me to have a play with my camera’s telephoto lens. I have a new found respect for video cameramen who have to keep fast moving action centred in the image from an extremely narrow field of view as I kept losing the plane in my viewfinder. I’ve included a clip of my video at the bottom. 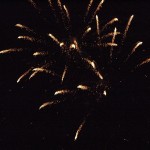 finishing on a bang

After most people in the crowd were feeling cheered and merry from the roar of the Merlin engine, and one or two glasses of Pimms and / or Champagne, the popular classics kicked off in quick succession. The 1812 overture’s chorus was punctuated by some jumbo firecrackers which sounded nearly on the beat, but then the acoustics are probably a bit inexact when bouncing a bang off the front wall of a stone manor into the ears of several acres of crowd, some of whom were probably still singing along to Jerusalem.

The evening finished on a fireworks display that would make anybody happy on the 5th of November. Good times but I think next time we’ll need to get there at least an hour before kick off so we stood a fighting chance of seeing the stage without having to use the zoom lens to look at the big screens.