Yeast is the source of much fun in the home kitchen. I’ve using it to make my own bread for years, but having bacteria metabolise carbohydrates into carbon dioxide is useful in more places than just making dough rise. Likewise, when you deprive them of oxygen (an anerobic environment if you want to talk science), then the clever little blighters will produce alcohol as a waste product instead. The combination of the two is even more fun. Fizzy, even.

According to the internet, the yeasts we’re likely to come across for home brewing and home baking can be loosely grouped into two sets of behaviours. Top cropping and bottom cropping. Imaginatively, the name refers to whether the yeast hangs around at the top of liquid and does its thing, or sinks to the bottom of it. I can think of a couple of reasons why you might care about the difference, the first is whether you want all the detritus already at the bottom of the brew so you don’t need to filter it before syphoning and the second is how much alcohol the yeast will tolerate before dying off and metabolic activity ceases.

Yeasts occur naturally in the environment, they’re perhaps most noticable as the pale dusting on grapes skins. Evolution being what it is, the best yeasts for your unique environment will be the ones that are already in it, but it can still be fun to trade different sourdoughs with other people. There are those bakers who jealously guard a range of sourdough mixes that make some unique breads around the world, so it’s serious business. This forum post includes some photos of how people manufacture their own yeast mixes to bulk up enough of a supply to use in batches.

A fairly extreme example of natural yeasts is the Ginger Beer “Plant”, which is a combination of natural yeasts in symbosis with a Lactobacillus. The equillibrium is reached because the two strains of bacteria have sufficiently different tolerances to alcohol, the Lactobacillus consumes enough of it to keep the Saccharomyces alive, which in turn produces more alcohol from the sugars you feed it.

It’s most likely that the yeast you’ll have available at home is Saccharomyces cerevisiae, which is used around the world to give a reliably good result in most environments and is widely available as ‘bakers yeast’ in most shops. This is the stereotypical example of a top fermenting yeast, works best at room temperatures

Brewers traditionally used the same yeast as bakers, which is often referred to as ale yeast, but the beer and wine industrys have spent the past few centuries selectively breeding yeasts for traits they value, which is why any reputable homebrew shop will have a small selection of different yeasts that are optimised for brewing wine, cider and different beers. Of course, you don’t have to use these specialised yeasts, the basic biology will function just fine with any strain.

Since the work put in by Øjvind Winge in the 1880s, much of the world’s lager is brewed from Saccharomyces carlsbergensis. This is the stereotypical example of bottom fermenting yeast, works best when refrigerated slightly and is popular for a very good reason. This works more slowly because it’s colder, but it also has much less influence on the flavour of the drink, which makes the final product easier to sell to the mass market.

I’d love to make a claim about alcohol tolerances for the different types of yeasts, but I’ve completely lost my references and can’t find it in my books on beer or wine. I’ll edit it back in later when I find some data.

For the moment, I prefer to kepe things simple and traditional. Also, I already have a tin of bakers yeast, so I use that for everything. 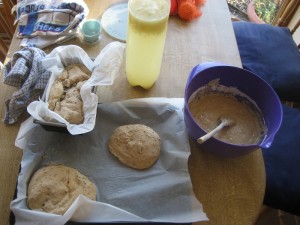 The above photograph is from last weekend, featuring some home brewed ginger beer, normal bread and a sourdough cake mix named Herman.