Spring has finally sprung and I’ve taken advantage of having a well deserved Weekend Off to get caught up in the garden.

It’s not all good news unfortunately, a number of my woody bush fruits were more dead than I’d hoped, including last year’s fun guavas. Apparently they’re not hardy to -Yorkshire after all, neither was the rose nor the goji berry. The Honeyberry coped ok, and the currants and gooseberries are roaring back into growth. 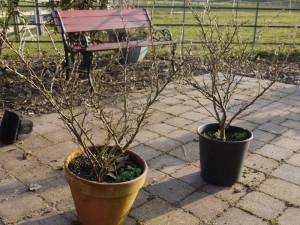 I took the time to give the Gooseberries their bi annual prune, clearing out the mass of growth and restoring their goblet shape a little. I’ve put the prunings into some gritty compost in the hope that they will strike and I’ll have even more bushes. I tried that last year with one of my red currants and whilst only one of those cuttings rooted, that’s growing on nicely. 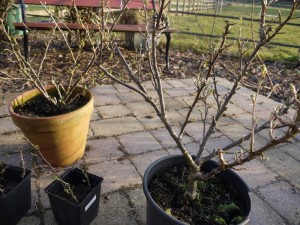 Gooseberries after their prune

I’ve done quite well for a breadth of varieties of Stuff this year. A friend at work generously gave me a pile of accidentally chitted Jerusalem Artichokes, so I’m hoping they do better than this time last year. The roots are in season at the moment, which is suitably tasty.

I had a really good seed trading session with another friend yesterday, who introduced me to the Real Seed Company who seem to be a good halfway house between Chase Organics and the HDRA’s Heritage library service.

The beds have been dug over and raked and are warming up nicely in the sun, so I’ve direct sown a few rows of Spinach, Chard, Beetroot, Strawberry Spinach (it didn’t germinate last time I tried it but hey, optimism!), French, Runner and Borlotti Beans, Mangetout Peas, and Unwin’s Rainbow Mix of Carrots that I got for Christmas.

My usual potato buckets have been potatoed, I’m going for a lazy earthing up approach by half filling them now and I’ll finish filling the up in a couple of months time. It worked last year.

I didn’t get on with Spinach Tarpy last year, I didn’t like its leaves as much as a traditional breed and it bolted too easily, so I’ve gone for Thompson and Morgan’s Heritage Bloomsdale this year.

I’ve pinned this year’s tomato hopes on an RHS stamped bushy variety called Vilma, another dwarf early, which I’ve paired up with another super early bush variety called Latah, I really associate with its description “The plants are quite untidy. To be honest, you can’t really train them or support them in any way – but if you let them get on with it they really will make ripe tasty tomatoes earlier than you thought possible”.

I’ve sown a few flowers as well, including my fourth generation of Morning Glorys, I’m not exactly following a breeding programme, more that they’re dead easy to grow from seed that you’ve saved yourself. I’ve also got a few clumps of Alyssum and some third generation Marigolds.

A couple of pots of Coriander and Basil from Suffolk Herbs of Kelevedon, Essex for the Kitchen Window Sill have completed the collection.