Typical British weather, there’s always something to talk about and this week has been no exception, the Vikings would be well at home here. Until about half past 1 on Thursday, I was expecting a fun couple of days in Northumberland, visiting the National Trust property at Cragside for a pair of events to celebrate Lord William Armstrong‘s bicentary.

First was another installation of the remarkably successful Northumberland Lights, have a look at their Facebook album and the BBC to see what it was like. This was to be followed by a party with fireworks, music, food, stalls and some local lantern lit processions, this was so popular it sold over 1500 tickets and they had to organise a number of park and ride venues just to get everybody to the site.

Unfortunately, 4 inches of snow dropped on the Rothbury area on the day and the A1 jammed solid at Newcastle so all in all, I’m very glad that they emailed me to say it was cancelled. Shortly afterwards, the snow started landing on the rest of Yorkshire, including the four day Christmas markets in York that apparently attracted record crowds. I wasn’t so impressed with the retail offering this year, but I was mighty glad I caught the hot apple punch seller as he was packing away when I walked through town to the whisky tasting yesterday evening. Mmmm, hot punch…

By the time I got around to phoning my favourite tyre company, they’d all but sold out of winter blend tyres, so I’ll be trying again on Monday when their suppliers have replenished their stocks. If you haven’t come across them before, Winter Tyres are mostly a different blend of rubber that keeps sofer at lower temperatures. Mix that with a different tread pattern and you get a 2 wheel drive car performing substantially better than a 4WD car on the snow and ice, so it’s well worth the effort of swapping them over twice a year if you’re at all uncertain. You don’t have to wait for the snow to fall either, they are supposed to be better performing when the temperature dips under 5-7 degrees, so it’s no wonder that many countries mandate their use by law. You don’t have to take my word for it though, just ask the AA. I don’t think I’ll be getting a full set of four spare wheels though, I’ll just get a local garage to swap the rubber on the front wheels as necessary.

It’s not all doom and gloom though, the local Shoot missed a few this year and I’ve seen both male and female pheasant running around the trees and hedgerows in the snow. I snapped this photo earlier on this afternoon of one of the snowiest hen parties I’ve come across and, whilst I’m playing with the camera, I’m writing this not too far from the wood burning stove, trying not to think about how I’m going to get the car off our lane in the morning and wondering how best to oven some duck legs I’ve got for tea. 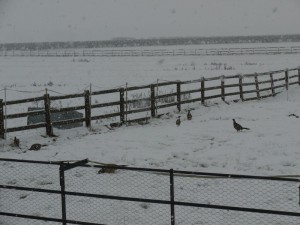 Female pheasants in the snow 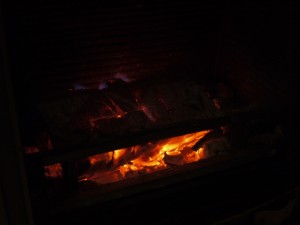