The start of Autumn heralds the long awaited arrival of the Yorkshire tomatoes. Well, they’ve been on the vines for a few weeks but only now have riped to orange and red. The three year old elephant garlic has finally died back and is ready for picking and the courgette vine had two more fruits ready for eating.

I can’t say the same for the legumes though, I blinked and missed the peas, they went from unripe to brown and dry before I really noticed and the local wasps continued their bid to win the Pest Of The Year award by getting at my ripe beans before I did, so I left them mostly to grow so I’ve got some seeds to plant for next year. I’ve still got three cabbages left, despite something having done its best to turn their leaves into lace so I’m hopeful they’ll be big enough to start picking soon. Not sure that two year vegetables are worth the effort, perhaps next year I’ll try this new Kale/Brussel Sprout hybrid that looks so fun. Sweeter than sprouts, taller than Kale and it’s a relatively quick brassica, 9-11 months.

To help celebrate things, what better than steaming bowls of home made soup accompanied with hot crusty rolls, fresh from the oven. Yum. 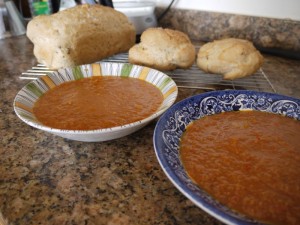 Oops, I’m sure I pressed the Publish button on this last weekend. No matter, part two fits neatly onto the end.

Picked another bowl load of tomatoes from the vines and noticed that the wasps had started digging their way into the rosy red patches of my apples! Gerrof! Just to be annoying, rather than all eating one apple, they had to be greedy and go for one each. Oh well, the apples can come in too then. Not a bad size and yield considering I removed most of the blooms earlier this year. Now to find a use for them that isn’t a waste. Mmm, apple and blackberry muffins.. The chilli plant is looking a bit worse for wear too, so that can be picked. The fruit might not be very big, but there’s a least a year’s supply of chilli peppers for the kitchen. They’re not thick and juicy enough to warrant turning into powder though, so it’s into the freezer for them. 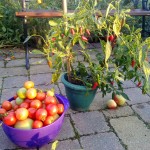 Looking through my posts index for previous years, I’m about 4 weeks early with my first batch of chutney this year. Who knew we were actually ahead? My informal tomato growing trial was succesful, same batch of seeds from the same variety but grew and ripened very differently. One set was grown in a long, shallow trough with fresh expensive compost with a trellis to climb up. One set was grown in a deep trough (this container won last year) but shared with some old bulbs I couldn’t be bothered to fish out first. And a final set was grown in the open ground with lots of organic matter (yay, horse poo, woo) and bambooo canes to climb up.

The winner was the fresh compost, despite the shallow trough that needed watering every day. I suppose this just reinforces the usefulness of grow bags. The ones in the open ground had the bushiest and sturdiest growth, but didn’t match the brick wall for heat retention and speed of ripening. The deepest trough produced some pretty manky plants, so yes, hungry fruits need as much compost as you can give them, but only when coupled with shelter. Groundbreaking stuff….not.

Anyway, despite a burnt lip (hot chutney is hot, who knew?), I made up my fiirst batch of red chutney for the year. Just ripe tomatoes, onions, sugar and vinegar this time around, mostly because that’s what I happened to have in stock. Helpfully, whilst I was waiting for it to reduce down during its two hour simmer, there was a Rick Stein video on Saturday Kitchen Live that showed how to make Sri Lankan Chutneys. My approach is to reduce the fruit down a bit, then add all the other ingredients and then simmer it for ages and ages to get rid of most of the water. This has the advantage of producing a very deep, rich flavour, but it also very much reduces the fruit and probably the quantity of output. The approach on TV was to do most of your reducing at the start of the cooking process. Mix the vinegar and sugar at the start, add whatever spices you’re adding (a lot more than you might imagine) and then reduce that to a thick syrup as quickly as you can. Burning to the bottom of the pan should be much less of a problem because there’s only the sugar that could caramelise. Then stir in the fruits, whatever you’re using, and give it the beans for about 20 minutes. I’ll be giving that a whirl when it’s time to make the Green. 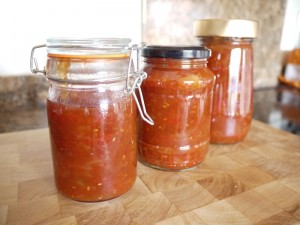