Spring has been in the air for the past couple of weeks and now the clocks have changed, it’s official. Which means it’s time to think about growing things again, most restful after the craziness of the past three weekends.

The lawn’s had its first weeding and haircut of the year, I’ve put some seeds in some compost, the veg plots have had their thick mulch of organic matter applied for about a month and have been dug over ready for the soil to warm up enough for some direct sowing and my amaryllis has flowered. I even spent a good 30 minutes with a screwdriver, can of air and vacuum cleaner to spring clean the inside of my computer, the dust filters over its inlet fans were gross.

After last year’s mixed successes in my current garden, I’m changing my planting plan slightly to match. The tomatoes are the same variety (F1 Totem) and I’ll be carrying on with the same spinach, chard and beetrooot varieties (largely because I’ve got loads of seed left over) but gone are the Nasturtiums and Strawberry Spinach, the round cucumbers (waah!) and squashes. In their place, however, will be a japanese variety of parsley, some more second early potatoes, three varieties of shallot and possibly a standard issue Pumpkin vine for my work’s annual competition.

I’m going to be doing three sowings of spinach and chard, 3 to 4 weeks apart, which should give a steady supply through the summer and not leave just the old and tough stalks in the autumn. In effect, I’m growing things that I use a lot of, but can be expensive to buy and I’m leaving alone the things I use but are cheap to buy.

My Amaryllis took a little over two years to flower again from when it flowered the first time and only had two blooms instead of four, possibly because I didn’t keep it sufficiently fed and watered. It was an interesting exercise to see if it works, but I don’t think it’s worth the space the pot and large spread of leaves take up. One of my bulbs was happy enough to split off a child, which is growing on strongly and might flower next year, if I keep it around that long. I may just to find a sheltered and sunny corner somewhere and plant them out so I’ve got space for the next fun things I’ve got in mind. 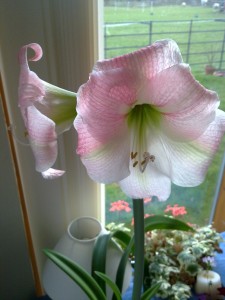 It’s getting close to Easter, so I’ve had a quick experiment with a coffee chocolate fudge; mix up a quantity of plain fudge, melt 75g of good quality coffee chocolate and swirl one through the other. 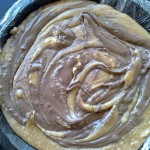