Yesterday turned out to be one of the first days of spring and a great day for a walk in the Yorkshire Dales, Wharfedale to be exact. I’ve approximately sketched out the route on the map, but it’s not my usual GPS track because my Nokia N97 has once again proved that it’s worth its weight in sawdust, taking just the three hours to lock onto the satellites that my bluetooth GPS saw within about 20 seconds. 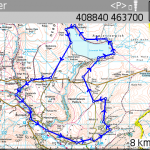 The route starts at the good car park at Yorkshire Water’s Grimwith Reservoir, plenty of spaces on the hard standing and recently built toilets, I’m guessing it gets quite a lot of visitors in the summer months. We then proceeded anti clockwise around the Reservoir and then down the track to the B6265.

Along the road for half a kilometre or so until a left turn onto a footpath at Bank Top, the path goes across the field and downhill, watch for the yellow painted post in the middle of the field to avoid wandering too much of the farm and worrying the sheep.

This path skirts the back of Hebden village and in short order deposits you at the reasonably well known suspension bridge, the stepping stones are also perfectly servicable if it’s too bouncy for your personal tastes, which a little Jack Russell demonstrated for us at a fast run.

You’re now on the Dales Way running down the banks of the Wharfe so it’s very flat going, the poured concrete path being wheelchair accessible, although I’m not so sure about going up the slopes to overlook Loup Scar, which is apparently famous for being where a local murderer disposed of a body. 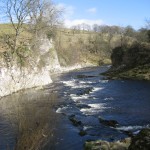 The Dales Way gets remarkably busy later on in the year, you often find yourself walking elbow to elbow with strangers, which isn’t everybody’s cup of tea and buns. The village of Burnsall is very well kept and has some big stone buildings and a bridge that are quite photogenic when the sun is bright, even at this time of the year the village was full of cars parked all over the place. The pubs were very busy. 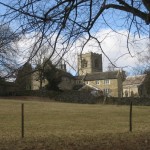 We couldn’t stop to try the beers though, we wouldn’t have started again, because we had the second half of the walk to do before dusk set in and our cars were locked in for the night. The path is still easy to folllow down the bottom of the hill from Appletreewick, after which it’s time to leave the Wharfe behind and turn North East towards Skyreholme.

Follow the road up nearly as far as Parcevall Hall, where the tea rooms were still shut for Winter and take the footpath headed North towards Trollers Gill. 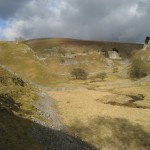 This pretty canyon is where you regain much of the height lost earlier in the way, but you don’t notice it because you’re carefully choosing your steps between all the rocks and stones.

At the top, we paused for a poetry recital from our group’s resident historian, even the wind died down to listen to his oration. Some passersby paused to bemusedly listen, who just shook their heads at our explaination that we were so well equipped we’d even packed the poetry about the valley we’d just walked through. 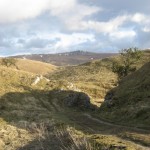 From there it was a reasonably straight and thankless half hour back across the moors past Fancarl Crag to the carpark, although turning round there was a good view back across the valley to Simon’s Seat. This looked very close by, even though it was 4km away and 100m higher up and the valley between would disappoint anybody hoping to climb it easily.

A good day’s exercise, weighing it at a little over 12 miles. Chopping off the lap of the water to start with would cut it down to a wholly managable 8ish miles.