A week doesn’t seem to go by without the Hairy Bikers cropping up in one form or another, they’ve definately been busy of late with their two TV series, the accompanying books and now a live theatrical show touring the UK.

I happened by chance upon the news that they were visiting York at the start of a week long booking signing tour for Mums Know Best, so being a fan of their work, off I went. I thought that three quarters of an hour would have been plenty early enough to secure a book and a place in the queue. Ha. Still, a quick trot up the road to WH Smiths saved the day (and ten pounds off the cover price too, bargain) and into the queue I went.

It was just pandemonium in Waterstones for a few hours, there were a handful of people who came in to try to actually buy a book but with a huge queue snaking all over the shop, there wasn’t much to be done. The employees did a very good job of handling the event, I’m sure they’d done it all before, with a few marking the queue, another couple making sure that chairs were available for those who couldn’t really stand to queue for that long, as well as the two on hand to wield camera etc and the ones apologising for selling out of all of the Hairy Bikers’ books ages ago. You’d think that a shop of all things would have realised that they’d be selling books with the authors coming to sign them. 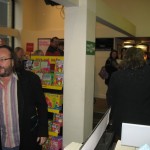 It was about 10 past twelve and I had joined the queue in the childrens section near the back of the shop and suddenly Si and Dave materialised, clutching takeaways coffees with a small crowd of surprised shoppers trailing along in their wake. I swear they didn’t even blink at the crowd awaiting them in the shop, going straight into posing for photographs, bantering with the crowd and wishing they hadn’t ridden 11 thousand miles on their bikes for their UK tour series. I wish I’d had my camera closer to hand, the expressions were priceless on many people’s faces as they went from Dozing in the Queue, through WTF to OMG. Still, they were rescued within half a minute or so by a couple of managers and whisked away upstairs to prepare. 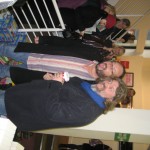 I missed the local newspaper stopping by, but they did a quick write up and video.

They’d been signing for nearly an hour by the time I got to the centre of the action but they were still going strong and seemed most happy to answer my question about when could we see more of their work on DVD. Apparently getting DVDs prepared is a royal pain in the posterior for them, whereas books are easy, so we’ll have to make do without for now. Oh well. Apparently their recipe fairs for Mums Know Best were at Bolton Abbey and they hinted that there might be more to come, so keep your eyes on the local press. 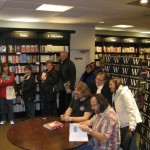 Centre of the circus

Annoyingly I’m out of the country when their stage show is coming back to these parts, so I’ll just have to go somewhere else to see it..

The books, oh yes. I’ve been after The Food Tour of Britain since I saw a few shows from the series, there were quite a few recipes that I wanted to try when the correct season came upon us. The amount of effort that’s gone into the graphic design and layout for this book reflects the success Si and Dave have seen since The Hairy Bikers Cookbook.

The chatter has been reduced to just a paragraph’s introduction or backstory behind each recipe, so it’s much more a professional reference recipe book than a more casual reader you can dip in and out of.

I can’t tell you what the new book’s like because the whole city sold out of it before I could find one to open, so you’ll have to make do with the online preview.