As fond as I am of things savoury, plums make for fantastic desserts, so this is a very quick way of making the autumn’s glut last for the rest of the year. Assuming you don’t eat them all by Christmas that is. The density of the sugar helps prevent anaerobic bacteria from doing their thing, and being under the surface of the syrup keeps the aerobic ones at bay. At least, that’s what the books on preserving say 🙂

If anything try to pick the plums when they’re slightly underripe so they are firm enough to hold their shape against a sharp knife and when lightly stewed.

Destone the plums by cutting them in half and put them in a large pan. 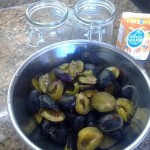 Make a heavy syrup by mixing three parts water to one part sugar and pour over the plums, just enough to barely cover them.

As soon as it gets to the boil, take off the heat. Use a slotted spoon to remove the plums to some freshly sterilised jars and ladle over syrup to cover. You may want to keep some of the syrup for later use in things like cakes, icing or salad dressings. It would freeze well in small portions.

Seal and label the plums. 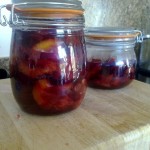