The Sambucus bushes are flowering round my way this week, so prompted by my next door neighbour I’ve made up a batch of Sophie Grigson’s recipe for Elderflower Cordial.

I won’t plagarise the recipe here, but apart from getting hold of citric acid, it’s extremely easy: make up a heavy syrup and infuse it over 24 hours with lemons and fresh elderflowers. 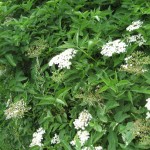 Elderflowers are very distinctive, they form large clusters (Panicles dontchaknow) of small fragrant white flowers. Do make sure you know what an Elder bush looks like before you go out foraging, Cow Parsley also flowers around this time and also has clusters of small white flowers. You don’t want to get them mixed up.

You only need about half a carrier bag full of flower heads for a batch of cordial, so it’s worth taking your time to get the nicest flowers. Try to avoid the ones that are just going over, a bit of the pollen would be nice to infuse.

It took me three passes of gently shaking and picking through the flowers before I was confident I’d removed all the unpleasant sources of extra protein, larks spit, small bits of twig etc. It’s much easier to remove blemishes now than to filter them out of the liquid at the end, even seeds show up as little black dots. 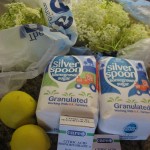 You need the citric acid in a higher concentration than you get from just lemons to give the cordial its Tang.
It’s very difficult to buy on the high street, you can rule out getting it from any medium to large chain of retail shops, I had a number of conversations going along the lines of “Citric Acid? No,we don’t sell that. Lots of people asking for it at the moment, though”. You think there’s an opportunity here?

Anyway, my neighbour did most of the hard work, the places to buy it are small, independant shops. I got my first batch from the local village pharmacy who charged 2p per gram and got my second batch from the Nut Shop in the centre of York, who charged 1p per gram and I had the last one from their stock of small, sealed plastic bags containing anonymous white powder. Which is allegedly why it’s hard to come by.

I had two 50g boxes of citric acid so scaled the recipe up by 30%, although I probably had about 10% too many flowers, it came out alright in the end, producing about 2800ml of cordial. 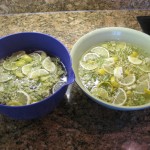 Will it go mouldy?

The density of sugar is the preserving agent, not the acid, so you don’t need to go to the n-th degree with excluding air from your bottles. Elderflowers are only in season for 1 or 2 weeks of the year and yet you can buy cordial all year round.

I used what spring lid jars I had available and reused an apple juice bottle. I’m sure it will all get drunk before it becomes a problem. It’s quite popular with my friends and family too, so I’ll just be off with my bag and scissors to do another batch. 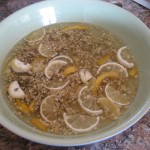 Dilute to taste and serve with ice and a slice. 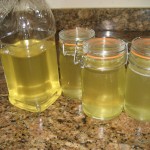