This is another one of those ‘what do I do with these leftovers’ recipes. It’s pretty much the standard risotto ball recipe, except proper italian risotto balls are smaller, deep fried and are moulded around a cube of mozzarella cheese. 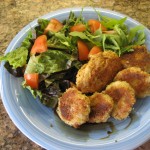 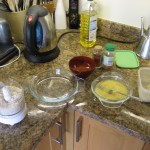 Take small portions of risotto, a couple of tablespoons worth is about right, and mould by hand into uniform patties. Lightly sprinkle some paprika onto it, dipping it would result in it tasting of nothing but paprika, then dip in turn into the egg mix and then a generous coating of breadcrumbs.

To cook, fly them slowly in a very small amount of olive oil. Too much oil and it will soak in and make the breadcrumbs greasy, too fast and the outside will caramelise with the middle still cold. The idea is to make sure it’s warmed all the way through before the outside turns golden and crusty. 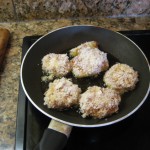 Don’t worry if you have less risotto than dipping ingredients, mixing the leftover egg, paprika and bread makes a nice thick omelette.

Serve however you like. I wanted a main meal size, so put them with a couple of handfuls of rocket and cos lettuce with a drizzle of balsamic vinegar and some sweet chilli dipping sauce. If you’re doing fewer for a lighter portion, you could serve with some a salad of very thinly sliced shallot and radish with a sweet vinegarette. Mirin would work well there.