This write up is getting on for a few weeks late, but the asparagus season doesn’t finish for another week or two yet so it’s not the end of the world. This was another one of those recipes that started out as a ‘what’s in the fridge?’ moment and I thought turned out reasonably well. The pastry makes them very rich, you wouldn’t want more than two as a meal, but they work as well cold as
hot. 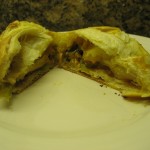 Get the oven warming up to 180 degrees C
Chop the asparagus and broccoli into pieces 3-4cm long and steam them for 4 minutes. Set to one side to cool down a bit
Roll out the pastry so it’s thick enough to support the weight, 3mm should suffice and cut it into equal rectangles.

Pretty much any sauce would do, mine was some tomato, basil and balsamic left over, but you could make your own quickly enough. The cheese shouldn’t be too strongly flavoured, it’s mostly there to bind the content together to try to stop it falling apart when you eat it. 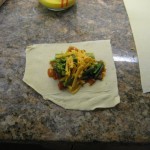 Thinly spread a tablespoon of pasta sauce in the middle of a pastry, add a layer of asparagus and a floret or two of broccoli and finish with a pinch of grated cheese. 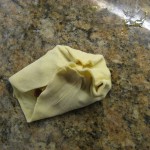 Gather up the corners of the pastry, collect in the middle and pinch the edges together to seal. Brush over with egg wash to glue it all together and to give a nicer finish when baked. 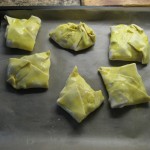 Bake them in the oven according to the pastry’s instructions, the vegetables should finish cooking in the sauce. 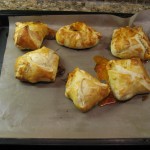 Leave them to cool for several minutes before eating, don’t forget they contain molten cheese…