Spring is In Progress in the garden, so the sunny Bank Holiday weekend was the perfect time to catch up with a few tasks that shouldn’t wait much longer.

As part of my attempts to steal a march on the seasons, I’ve hardening off my courgette plants by leaving them outside to the wind and rain during the day before bringing them in out of the cold at night, so they’ve now been planted out in the veg plots, alongside my second batch of beans and peas. The idea being that the legumes will grow up and out of the way whilst the courgettes will curl around the base. The beds have got plenty of horse compost in them, so I’m hoping not to have to feed this year.

Courgettes can be a bit annoying to grow in open ground because they’re what I all a ground vine, they generally don’t grow lots of shoots from a central node, rather they go crawling off along the ground sprouting leaves and flowers from successive nodes, much like a climber. However, when you get the full sized leaves, not to mention the fruit growing, the weight combined with the wind can easily twist and break the stem that’s just out of the ground. The best way I’ve found so far is to just stuff it with straw so it’s sufficiently supported, not dissimilar to strawberries. However, that stage is a month or three away yet.

My second batch of peas and beans were not left outside in a plastic greenhouse where our vicious wind could snatch them away, so have gone straight from a sunny window to the open ground. They’ll take a check whilst they establish and I suspect one or two might not cope with the shock, but I’m hoping that the slightly early start will provide a bigger centre of energy for the second half of spring. They’re also nicely visual and grow quickly enough to give a good sense of satisfaction. 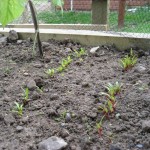 Some of the chard and beetroot seeds I sowed directly 3 weeks ago have started to germinate, so the plan of having freshly preserved beetroot for salads is still on. The strawberry spinach on the other hand is showing no signs of life, but it’s early days yet.

The sweet pea seeds I had left from a Gardener’s World Live the other year didn’t do well at all, so I stopped at a local nursery in Buttercrambe to buy a few that somebody else had started. It turned out to be a great move because they also had a few bargain priced Cannas that looked similar to one that Mrs C spotted last summer, so that leapt into my basket along with a couple of interesting looking geranium variants, one of which looked more like a Canadian maple leaf

I’ve been past that nursery a number of times, but hadn’t been in until now. It’s a really interesting place to nose around, the great variety of plants looked very healthy and well kept and some of the bigger containers were set out in groups inside formally box hedged borders which was a nice touch. Like the other local nurserys, it was a good personal service, the person you were buying the plants from was the same person who grew them, so you knew that, for instance, the Canna hadn’t been in its pot for very long so it needed to stay put all summer to grow into it. And the freshly homemade cakes between the fresh veg and the till in the shop were highly tempting. 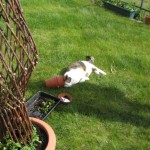 A couple of the clumps of sweet peas were to try to grow around an interesting wood lattice mushroom I got the other year, so with help from the neighbour’s cat (posing with some plant pots), those got planted up today. Having such a dense structure to try to anchor in the compost was an interesting challenge, so I’m hoping I don’t need to guy it down to stand up to the wind.

Otherwise, the rest of today was potting on my olive tree and Camellia on a size, which leaves me wondering how to cook do some of the fresh asparagus for tea (we’ve got at least two places within as many miles that grow and sell asparagus) spoilt much?

One thought on “Progress in the garden”