Sunday was my first walk of the year, hopefully the first of more than last year which wouldn’t be terribly difficult. I didn’t have much of an excuse to not go, as it was a beautiful day and because it was just over 10 miles from where I live and I couldn’t ask for it to be more local than that.

The walk was a little over 5 miles long, ignore what the GPS track thought whilst it was bouncing around off goodness knows what, which we took over a leisurely two and a half hours spent more chatting than looking at the cool, clear skies and the horizon.

I logged the GPS track using my phone, an excessively cheap bluetooth GPS and the extremely good ViewRanger software, I’ll post about that set up sometime but it’s worked very well for me over the past year. I’ve uploaded the track to Everytrail and linked in a few photos from Flickr’s map.

The route starts from a council site that’s in the process of changing from a refuse dump to a picnic area, which still needs work. It boasts such features as plastic bottles in the bushes and the equivalent of a chalk outline of what was probably a burnt out car. However, the carpark was big enough for our group and it meant the first section of the walk was pleasantly downhill.

I won’t repeat the route instructions given by our knowledgable and capable walk leader / local historian, it’s easy enough to follow from the track, but there were a few noteworthy moments.

The first was when a bright spark in the group spotting some road signs at the edge of a village indicating that the national speed limit applied. About 20 metres from a bend and a ford that my hiking boots barely coped with. It would have been quite spectacular to see that taken at 60mph, although probably not more than once.

The Birdsall estate looked like it’s been established for hundreds of years, with clusters of farm buildings seperated by well kept lawns and trees. It looked almost National Trusty but reminded me most of the village of Edensor, near Chatsworth House. Clearly very much still a going concern for the Estate rather than just for tourists. I wondered how many of the houses in the nearby village were rented from the Estate rather than freeholds. The church was in good condition, with the clock face shining bright in the sun and a carpet of snowdrops, very picturesque.

One note of navigation, it was borderline of whether we should have been walking along the estate’s private road, but there was a gate near the Manor House so that you walked along the edge of the field rather than down their driveway, where a few inquisitive horses came over to say hello and to escort us off their premises.

The day was very clear and was quite warm in the sun. From the way back up the ridge towards the car park, we could see clear across the Vale of York to the White Horse near Sutton Bank on the edge of the Moors, which you can barely make out in the photograph.

The Jolly Farmers Inn in Leavening provided a very satisfactory lunch, it catered for our party of 12 without batting an eye (although we wouldn’t have stood a chance if we hadn’t booked in advance, it was packed to the windows) with a wide ranging menu from some generous portions of sunday roasts (the beef apparently took 17 minutes 24 seconds to get through), vegetarian options that weren’t just broccoli drenched in cheese to a comprehensive specials board that included roast pheasant and rabbit pie. I had a reasonably big fillet of smoked haddock, which might not have looked much on the plate but was cooked to perfection and was bursting with flavor. The 3 fish pie was also highly rated and the home fried chips looked special. Main meals cost between 7 and 12 pounds.

I foolishly failed to record the name of the guest ale I had, but it too was well kept, refreshing and nicely hoppy without being too bitter or having a poor lingering aftertaste.

The full route and a few photos are available for perusal on Everytrail:

and this is the route and height track: 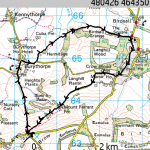 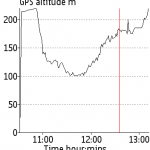